Thermodynamics and its application 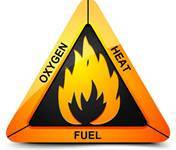 Fire Triangle : The triangle for fire consists of three side they are heat,fuel and oxygen if one part of this triangle is removed Fire cannot be formed.

Thermal Transfer : If a hot substance kept near a cold substance the flows from hot region to cold region is called thermal transfer.There are three types of heat transfer they are,

States of Matter : The five states of matter are,