They're Not So Different!

What we call mathematics is actually a really wide subject with a lot of branches, categories, sub-categories which are sometimes so different from one another that it's hard to believe that they are all coming from the same subject, mathematics. But when you start seeing the same thing from different perspectives, you'll see that somethings in mathematics, no matter how distant they seem, are actually equivalent. You'll see that different things are actually saying the same thing. To demonstrate that we'll see a visual proof of the AM-GM inequality for two variables. We'll learn that things aren't so different after all.

Before we get to the amazing proof of the AM-GM inequality, we'll need to learn a couple of things. First we're going to see how some geometrical constructions are equivalent to mathematical operations. We're going to learn to add, subtract, multiply, divide and take the square root of a number with a compass and a straightedge. 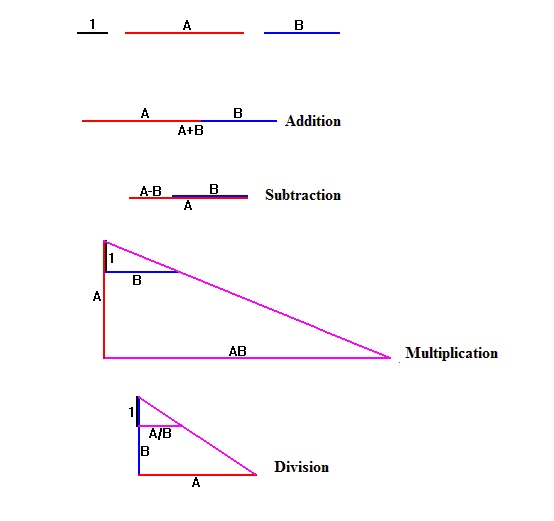 The image above demonstrates addition, subtraction, multiplication and division through geometric construction. Also pay attention to the colors. Addition and subtraction are pretty straightforward. Multiplication and division use the properties of similar figures. So we are able to perform the four basic arithmetic operations with a straightedge and compass. And these constructions aren't that difficult.

Taking the square root is a bit more complicated and it looks like this:

If you want to know why it works, here's the proof:

ADC is a right angled triangle because all triangles inscribed in a semi-circle are right angled. A little bit of angle-chasing [and the picture shows how to do that] reveals to us that triangles ABD and DBC are similar. Thus we have,

Now that we've equipped ourselves with the knowledge required to prove the two variable case of the AM-GM inequality, let's get on with it.

If you've understood everything up to this point, this proof's going to be really easy for you. I'm not going to use any words for this! Behold: 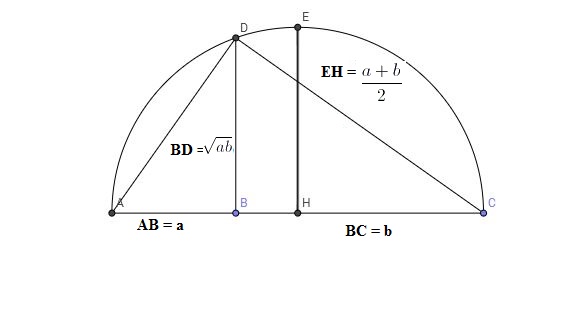 The best part about this proof is that you can actually see that ab​ is smaller than 2a+b​. You really don't need words for this [not entirely true, but the words needed were discussed earlier, so you know what I'm saying].

This was just an example [which is one of my favorites] to demonstrate that you could use different ways to say the same thing.

Note that I said nothing about taking the cubic root or fourth root or higher roots. This is because you can't do that with a straightedge and a compass. That is why you can't trisect an arbitrary angle or double a cube. But we'll discuss about this later someday.

Sources: The first two pictures were found through a Google search and then shamelessly stolen and modified. :)

We need a tag of #ProofWithoutWords!

Impressive!!! The image in the proof also follows that when a=b, then obviously BD and EH are the same segment and so BD=EH   ⟹  2a+b​=ab​.

By drawing a suitable diagram, show that

I think I can do that. Do you want me to post a solution or do you want others to work on it?

@Mursalin Habib – The last expression in Calvin Sir's inequality I think should be a+b2ab​ and not a+bab​,as all the other expressions mean Q.M,A.M,G.M and so I think the last one should be H.M.

@Bhargav Das – Note that a+bab​<a+b2ab​ for positive numbers a and b. So the inequality is still correct.

@Mursalin Habib – Yeah. But I think he meant H.M only. Also, I think it will be hard to make a diagram with a+bab​. P.S: I may be wrong.

But you're probably right. He probably meant a+b2ab​ instead of a+bab​.

@Mursalin Habib – Oh sorry. I missed. Just bisecting the length H.Mwould give us the one we need.

@Bhargav Das – Yes, that is what I meant.

@Bhargav Das – Here's how to do it then. See this.

It turns out that the same sort of thing can bridge mathematics and computer science:

However it's much less intuitive, it's a bit too complex for me to fully understand. But, the basic idea is that you can use computer programs to construct mathematical proofs. I won't go into it too much detail since this isn't a CS thread and I don't want to derail the discussion, but the idea is basically that, given a language with the correct sort of (very strict) restrictions, if you make certain assertions in your program, and you can get it to compile, you've made a proof.

Very well written; however, it seems that you got a little sidetracked. Only after I looked at the title after reading the article did I realize that it was about similarity between different fields of Mathematics, not about constructions. It would be more suitable, in my opinion, to have the name be Constructions and an example to be the proof of AM-GM.

Thanks for your feedback!

The similarity between the different fields of mathematics is a really big subject. I wanted to take a really small part of it and let people appreciate its beauty. I wanted to show people that you could view something in a completely different perspective. Yes, I agree that this post is a little constructions-heavy. But that is exactly what I wanted to do.

As always, your feedback is appreciated!

It can also be proven using the MVT in Calculus. Nice!