To the Women on Brilliant 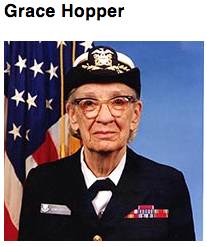 The White House has recently produced a series called The Untold History of Women in Science and Technology, in which they narrate stories of prominent influential women.

I encourage you to check out and listen to these inspiring stories, and then add your own voice to it.

There are millions more untold stories of women who have broken down barriers in the fields of science, technology, engineering, and math — and accounting for the rich history of women's contributions in these fields is going to take all of us telling them. Maybe it's a former teacher. Maybe it's your grandmother.

And let's not forget Emmy Noether, the mathematician who coached Albert Einstein through the unwieldy tensor analysis of his own General Theory of Relativity, and who is also responsible for "Noether's Theorem", which to this day probably has a more significant impact on modern particle physics than even Einstein's General Theory of Relativity. Einstein and others have said that she was one of the most important persons in the history of mathematics. This is a woman that even Einstein looked up to and recognized as a genius.

After looking through the list of her students, whose work she lovingly fostered and promoted, and of the many collaborations she had with other prominent physicists and mathematicians, it's hard to imagine where these fields would be today without her brilliance and nurturing attitude.

What I would very much like to stress is that while, yes, Noether was an effective teacher (helping theoretical physicists!), her work itself was every bit as significant and influential as other breakthroughs that are well known in popular media. Everybody knows about Einstein and relativity theory, but few except the professionals know about Noether's Theorem, without which modern particle physics today would be unrecognizable. Her contributions deserve considerably more attention. She was not simply an adjuvant, she was an originator.

As an example, we have Rosalind Franklin, who should have been included as one of the co-discoverers of the helical structure of the DNA, popularly attributed to James Watson and Francis Crick. Without her work as a X-ray crystallographer, it's probably unlikely that the famed duo would have worked out the structure.

@Michael Mendrin – No, I realize that. I wasn't denying her role as an originator and pioneer, but what struck me upon reading the literature on her was just how extensive her influence was on so many branches of mathematics and physics, not only through her own work, but through her mentorships and collaborations. I never intended to emphasize one over the other, but just meant to expand on the influence she truly had.

@Brian Charlesworth – Perhaps I was thrown off by words like "her students", whom she "lovingly fostered", with a "nurturing attitude". I thought you were suggesting she was just a really nice teacher, instead of being a powerhouse in her own right.

@Michael Mendrin – Heck no. Perhaps my choice of words seemed patriarchal, but I would use the same terms to describe my uncle, who was not only a pioneer in the field of conservation biology but through his graduate students had that much more influence on the discipline.

I live in a household of radical feminists; the last thing I'm going to deny is the superiority of women at pretty much everything. Not only with self-preservation in mind but because it's true.

Closing the gender gap in the field of computer science and in the software industry is something I'm very passionate about.

One of my personal heroes is Margaret Hamilton, computer scientist extraordinaire. She worked on the software for the Apollo space program. Her work prevented an abort of the Apollo 11 moon landing! (basically because the code was asynchronous)

Here is Margaret with (some of) her code for the Apollo program! How cool is that!

Thanks for sharing this series, @Calvin Lin, and thanks Michael Mendrin and Kelly Tran for sharing stories of inspirational women!

Two of my mathematical heroines are Sophie Germain and Julia Robinson. Sophie Germain was one of the pioneers of elasticity theory who made significant contributions to number theory, including work on special cases of Fermat's Last Theorem. Julia Robinson was an extraordinary mathematician, whose contributions led to the resolution of Hilbert's tenth problem (which asks for an algorithm to determine whether a Diophantine equation has any solutions in integers).

I hope this series will encourage others to share the stories of heroines in their own lives and offer encouragement for all of us to work together so that everyone who has the desire to do and learn mathematics has the opportunity to do so.

I am surprised nobody has mentioned Ada Lovelace. Widely regarded as one of the first computer programmers, she was first asked to translate a paper written by Luigi Manaberra on Babbage's(the father of computers) analytic machine. Since she knew so much about the machine because of it, Babbage asked her to expand the article. She ended up finishing an article that was three times the length of the original. In this paper she made strikingly prescient observations about the future use of the machine like symbolic manipulation and music creation. She even ended up writing several Elaborate and 'bug free' programs for the machine(famously one that computed Bernoulli numbers). Babbage himself “spoke highly of her mathematical powers, and of her peculiar capability — higher he said than of any one he knew, to prepare the descriptions connected with his calculating machine.”

EDIT:Sorry, I didn't realize she was already on the link.

She is mentioned in Calvin's "Untold History of Women" link, but you have expanded on that entry with some interesting details. From the articles I've read there seems to be quite a lot of debate as to the extent and originality of her technical contributions, (perhaps valid, perhaps the usual misogyny), but what I find particularly interesting is that she alone foresaw the potential for computers outside of mathematics. And this was in the mid-19th century; amazingly prophetic.

This series would not be complete without a mention of Marie Curie and her daughter, Irène Joliet-Curie. Marie was awarded two Nobel Prizes, (one in Physics and one in Chemistry), and Irène one Nobel Prize, (Chemistry). Not only did they produce groundbreaking work, but they knowingly risked their lives, (due to constant exposure to radioactive materials), for the pursuit of knowledge. Their brilliance and courage have always been an inspiration to me. Irène's daughter, Hélène Langevin-Joliot, is also a prominent nuclear scientist; this family's scientific legacy is unparalleled.