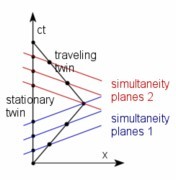 There are certain intersting paradoxes and consequence in special theory of relativity as proposed by Einstien. These are

The twin paradox, stems from special relativity: one of two twin brothers undertakes a long space journey with a high-speed rocket at almost the speed of light, while the other twin remains on Earth. When the traveler returns to Earth, he is younger than the twin who stayed on earth.

This appears to be a paradox if one expects that, according to relativity, either twin may validly claim to be "at rest", and thus each expects that the other twin will age slowly. In this case the twin who turns round pursues two different paths through space-time whereas the other twin has a constant linear path. Either twin could verify this by jettisoning material at intervals (the material would be arranged in a line for one twin and form two lines for the other) or by observing onboard accelerometers.

consider a space ship going from Earth to the nearest star system a distance d = 4.45 light years away, at speed v = 0.866c (i.e., 86.6% of the speed of light). The round trip will take t = v2d​ = 10.28 years in Earth time (i.e. everybody on earth will be 10.28 years older when the ship returns). Ignoring the effects of the earth's rotation on its axis and around the sun (at speeds negligible compared to the speed of light), those on Earth predict the aging of the travellers during their trip as reduced by the factor epsilon =1−c2v2​​, the inverse of the Lorentz factor. In this case ? = 0.5 and they expect the travellers to be 0.5×10.28 = 5.14 years older when they return.

The ship's crew members calculate how long the trip will take them. They know that the distant star system and the earth are moving relative to the ship at speed v during the trip, and in their rest frame the distance between the earth and the star system is ? d = 0.5d = 2.23 light years ("length contraction"), for both the outward and return journeys. Each half of the journey takes v2.23​ = 2.57 years, and the round trip takes 2×2.57 = 5.14 years. The crew arrives home having aged 5.14 years, just as those on Earth expected.

If a pair of twins were born on the day the ship left, and one went on the journey while the other stayed on earth, the twins will meet again when the traveller is 5.14 years old and the stay-at-home twin is 10.28 years old. This outcome is predicted by Einstein's special theory of relativity. It is a consequence of the experimentally verified phenomenon of time dilation, in which a moving clock is found to experience a reduced amount of proper time as determined by clocks synchronized with a stationary clock. Examples of the experimental evidence can be found at Experimental Confirmation of Time dilation.

Origin of the Paradox

The strange result of twins of different physical age was not the central problem of the "twin paradox". As early as 1905, Einstein predicted that a clock which is moved away and brought back will lag behind stationary clocks. Einstein called that result "peculiar", but the calculation is straightforward and the example was not presented as paradoxical Resolution of the paradox in special relativity

The usual resolution of the paradox as presented in physics text books ignores its origin (it only surfaced with general relativity, see above) and regards it as a problem due to misunderstanding of special relativity. Here the Earth and the ship are not in a symmetrical relationship: the ship has a "turnaround" in which it feels inertial forces, while the Earth has no such turnaround. Since there is no symmetry, it is not paradoxical if one twin is younger than the other. Nevertheless it is still useful to show that special relativity is self-consistent, and how the calculation is done from the standpoint of the traveling twin.

Special relativity does not claim that all observers are equivalent, only that all observers in inertial reference frames are equivalent. But the space ship jumps frames (accelerates) when it does a U-turn. The twin on Earth rests in the same inertial frame for the whole duration of the flight (no accelerating or decelerating forces apply to him or her) and he is therefore able to distinguish himself as "privileged" compared with the space ship twin. The accepted resolution of the paradox is that a calculation different from that above must be made for the crew, a calculation which explicitly recognizes the change of reference frame, and the change in simultaneity which occurs at the turnaround.

In special relativity there is no concept of absolute present. A present is defined as a set of events that are simultaneous from the point of view of a given observer. The notion of simultaneity depends on the frame of reference (see relativity of simultaneity), so switching between frames requires an adjustment in the definition of the present. If one imagines a present as a (three-dimensional) simultaneity plane in Minkowski space, then switching frames results in changing the inclination of the plane.

In the spacetime diagram on the right, the first twin's lifeline coincides with the vertical axis (his position is constant in space, moving only in time). On the first leg of the trip, the second twin moves to the right (black sloped line); and on the second leg, back to the left. Blue lines show the planes of simultaneity for the traveling twin during the first leg of the journey; red lines, during the second leg. Just before turnover, the traveling twin calculates the age of the resting twin by measuring the interval along the vertical axis from the origin to the upper blue line. Just after turnover, if he recalculates, he'll measure the interval from the origin to the lower red line. In a sense, during the U-turn the plane of simultaneity jumps from blue to red and very quickly sweeps over a large segment of the lifeline of the resting twin. The resting twin has suddenly "aged" very fast, in the reckoning of the traveling twin.

I think dividing the note into paragraphs would make it more interesting.

The "Twin Paradox" is so-called because one too easily jumps into the conclusion that what each twin "sees" is the same as the other ("your're the one moving, not me!"), but it doesn't work that way in special relativity. The twins do not see the same thing, there is no symmetry. Let's imagine that the stationary twin has taken the time and effort to construct a vast stationary array of observation points, all carefully calibrated to keep synchronized clocks at measured distances from each other. With this array of observation points, the travels and experiences of the moving twin can be recorded, and data later analyzed. The data will indeed show that the the moving twin's time has dilated. Can the same thing be said for the moving twin? No. Once the twin has stopped moving, and has reversed direction, the other twin must start all over again to construct his own vast array of observation points, and once all the clocks are again carefully synchronized at measured distances apart, there will be a discontinuity in data results from the previous before he had stopped. Thus, symmetry has broken down, and one cannot automatically expect that both twins should age the same way.