Where do you build your lemonade stand? 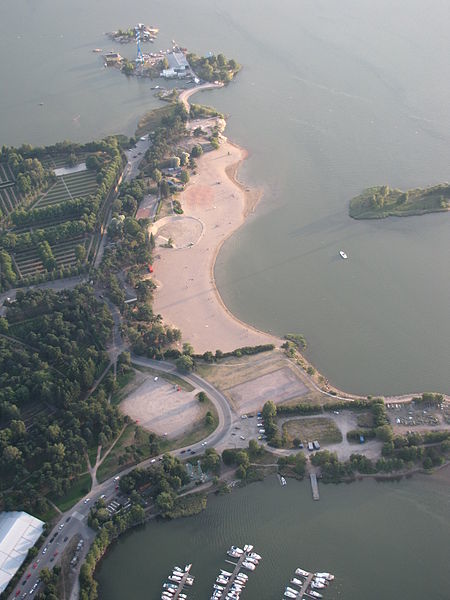 There is a 1000 meter stretch of pristine beach.
It is serviced by 3 lemonade stands, of which you are the owner of one of them.
Each morning, you decide at which point you want to set up your stand, and it has to stay fixed for the rest of the day.
The beach patrons are equally distributed along the beach. They will favor the lemonade stand that is closest to them.

Note by Calvin Lin
6 years ago

So this place is in Helsinki, Finland, with google maps coordinates 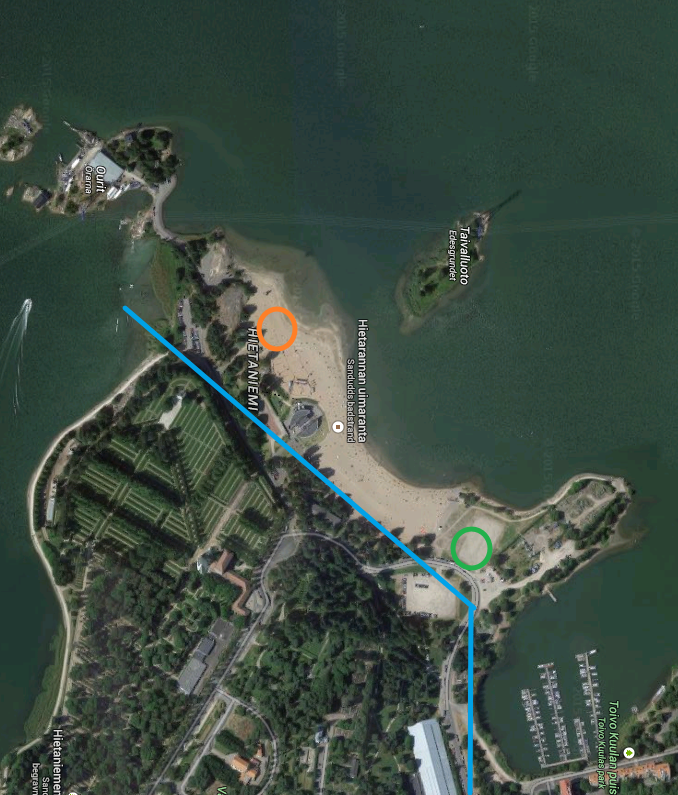 Since the beach petrons are uniformly, and I assumed tourist are from other countries, I'm going to serve Simas 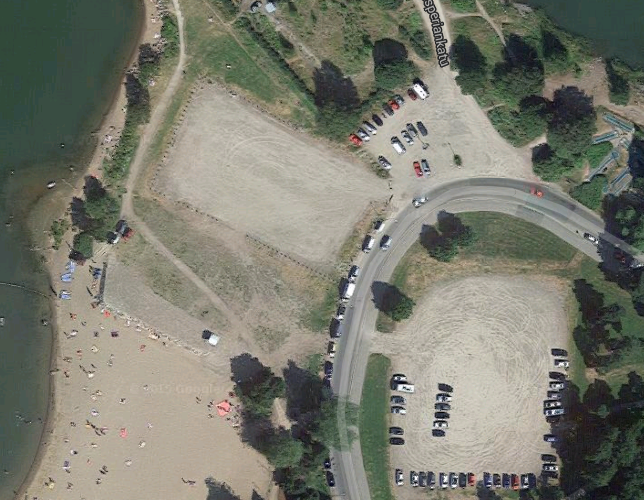 So there's plenty of cars, which means the there's highest traffic of people there despite having a uniform amount of beach patrons as people would either be exiting or arriving to the beach, either way they will be thirsty for some Simas. Not to mention I can obtain customers below the GREEN REGION who rides boat. And also, if I open my stand next to the roadside (see map), and customers don't have to walk down to buy them.

If I'm in the ORANGE CIRCLE, I would only get tourists who stay put for a long time (sunbathing) to buy my Sima. Since the number of patreons is uniform everywhere, it's less likely for the same customer to quench their thirst with another Sima, unless it's that good (Diminishing marginal utility).

Business should be the best in GREEN CIRCLE!

2) Yes, you get the customers who can't get Simas from anywhere else. Win-Win!

3) Definitely. because (I think) the locals who go there by car (thus arriving at the GREEN CIRCLE) regularly would probably already know who sells the best Simas. And without competiting with other stalls, I would move to ORANGE CIRCLE or closer to Ourit and sell them at a higher price for the tourist, and still making profit from the tourist, whereas the GREEN CIRCLE still has plenty of competition between stands, locals will be definitely prejudice towards one stall. Either way, I'm not taking the risk (risk averse) to be under prejudice, so I will be in ORANGE CIRCLE. If I'm a risk taker, I would probably still stay in GREEN CIRCLE.

Its amazing !I will never open a business with you( @Pi Han Goh ) around.

Nononononono. I was done trolling for the day ... The picture was supposed to inspire interest ...

Yep. Even I searched for the pic in Google Maps ! +1

Not only will you get he most money, you will cause more people to congregate around you which results in more money. This causes more people to trust you for good lemonade, compared to others. Your method influences the human psychology. I hope this thinking doesn't bend the rules.

This is also a game theory problem, in which the problem is underspecified: are the other two people attempt to minimize our profit, or attempt to maximize their own profits without regard to how the other two are doing, or some sort of mixture of both, or any other objective?

You never know what other people will do when playing a game ....

If you don't specify any, then I assume worst case: conspiring to make you fail. In which the answers are trivial...

Question 1: Nowhere; you will never be profitable. If you set your stand on x, the other two can set up their stands on x−ϵ and x+ϵ, guaranteeing your loss.

Question 2: Likewise, you should never choose to be the first to set up your stand. In fact, it can be shown that you will never be able to get more than 250 meters:

Question 3: As Question 1 states, you should never play early enough; you have to be one of the last two people to set up your stand.

Question 1: Even as first player, you can actually guarantee 250−ϵ meters. (I think you can get more when moving latter, but this is enough to show how different assumptions make different results.) Set up a stand on 250−ϵ. The second player won't play anywhere below 250−ϵ, for the simple reason that playing on 750 is strictly better: if the third player then plays below 750, the second player is guaranteed 250 (the part to the right), while if the third player plays above 750, the second player is also guaranteed 250 (at least (500,750)).

@Ivan Koswara – Actually, you don't even need the strong assumption that they are conspiring to make you fail. All that is required is the (reasonable) assumption that everyone is rational and out to maximize their profits.

The irony is that if you're the first person to place a stand, and you place it at (near) the center, then when the 2nd person comes along, he will choose to place his stand right next to yours (choosing the smaller side) and then the 3rd person will come along and place his stand next to yours on the larger side.

What other strategies are there? Is the first player doomed to not make any money at all?

Hint: Remember the game of "100 jewels amongst 5 pirates", how much can the first pirate get?

All that is required is the (reasonable) assumption that everyone is rational and out to maximize their profits.

This is what I mentioned at the end of my comment, stating that it's possible to get at least 250−ϵ when you assume they are only maximizing their profits and not minimizing yours. (For two-player zero-sum games, the two concepts are identical, but not so for more than two players, hence why I asked.)

@Calvin Lin – And of course I throw it to another mathematical community...

Assuming players only maximize their profits, the response was that everyone can guarantee anything lower than 0.25, but I'm not confident each player can guarantee 0.25.