"Why Aliens And Volcanoes Go Together "- Happy Earth Day! 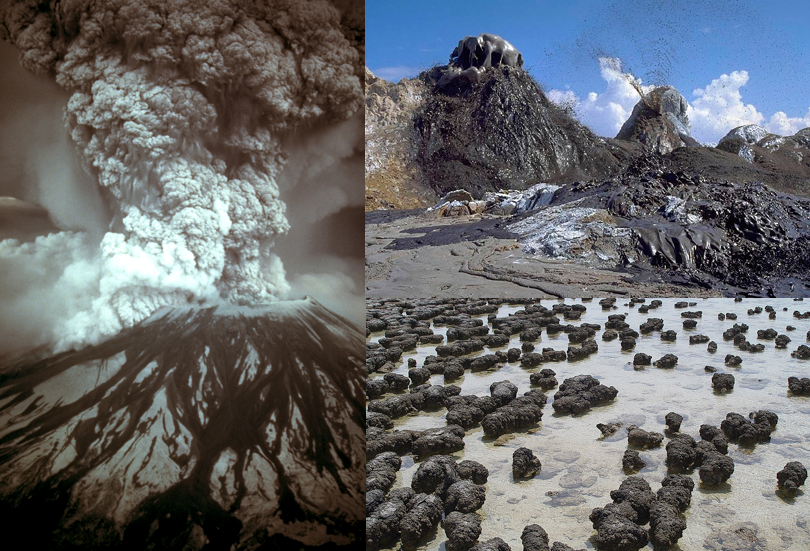 On the left is Mt. St Helens displaying how the Earth burps carbon from the deep Earth into the livable Earth. On the top right is Ol Doinyo Lengai, possibly the world's strangest volcano. It erupts carbonatite lava, a fringe consequence of the deep earth carbon cycle. Lower right, are modern analogs of the oldest known living things on earth, stromatolites. Unfortunately, it is likely that aliens look more like those and less like Chewbacca.

So... partially because it is International Earth Day, you might want to read this:

"Why Aliens and Volcanoes Go Together"- Nautilus Magazine

It is rare for there to be articles written for a general audience that capture a cool basic question in Earth Science, without mostly addressing the polarizing political issues surrounding them(hazard prediction, climate change, resource scarcity etc...). I think the Earth's carbonate-silicate cycle is extremely under appreciated, and thought this article did a decent job talking about it.

This is a typical cartoon used to illustrate the Carbonate-Silicate Cycle:

A hazard I would caution people about when reading an article like this, is many of the concepts "explained" in the article should be regarded as the "current/exciting lines of inquiry" and not the "status of known truth."

A challenge in teaching/explaining geology to people is the tension between the fact that what actually happened in the past, and how you study natural history are two very separate things, that you aspire to make relatable. For the sake of brevity, it is usually impossible to preserve that distinction in a popular article.

For example, models of mantle water compositions and their potential historical effects are extremely useful. They are not the same as knowing what the mantle's water composition is, how it varies locally(the mantle is a big place), how it has varied through time, how it is affected by sedimentation rates, and what it's overall effect on geochemical cycles has been and will be. Those are some of the hardest and best questions being asked by petrologists. Models, are essential to determining why those questions matter and formulating them in the best way possible, they are not the answers.

The idea that Plate Tectonics has affected the evolution of life is an old idea in Plate Tectonics. The evidence of how it has done so is readily observed in the fossil record.

Really a new thing to know

Hah, I'm watching "likes" come into the servers as I debug something and I noticed that Pete got you back as the first liker on your post here.

@Finn Hulse – Yeah, there are some pretty cool challenges we get to solve and it's awesome to build something that people seem to love using.

The main downside is there are always more things to code than time to code them so we (the global we, including non-coders like Sue/Silas/Pete) have to pick and choose which things are the highest priority.

@Sam Solomon – You got that right! :D

@Sam Solomon – What are you guys working on currently?

@Finn Hulse – We usually don't like talking about what we're working on because things change pretty quickly depending on any number of factors which may delay what we're working on indefinitely. I can tell you what one of my co-workers is working on since Sue has already said it was in the works: better reporting of incorrect/poorly stated problems including automatic retractions of previous rating drops caused by the problem. If all goes well, this will be released next week.

Super interesting! Thanks for sharing it with us. :D