You are inductively Calvin 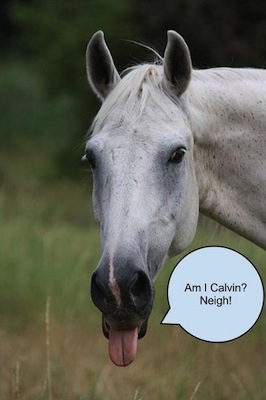 See the Blog for the full story.

Are you convinced that induction has proven your name to be Calvin?

Just how powerful is Induction? I'd use it to show that your name is Calvin.

Claim: In a group of n people, everyone has the same name.

Proof: Let's show that condition (1) holds. In a group of n=1 people, all of them have the same name.

Thus, by Mathematical Induction, the set S includes all positive integers, so in a group of n people, everyone has the same name.

In particular, since my name is Calvin, and you are in the set of all N people on Earth, it follows that your name is also Calvin.

The above is adapted from Polya's proof that "No horse is of a different color".

No vote yet
11 votes

Fails at k=1, since the first 1 person does not 'intersect' with the last 1 person if there are 2.

I don't get it... neither the proof nor the anti-proof.

What does the proof by induction, which deals with integer values, have to do with categorical variables such as a name? One has a magnitude the other one doesn't... They're not in the same domain.

Yes there is a gap in k=1. I think this post is meant to remind other Brilliant users about some tricky spots when you are writing a solution.

Spoiler: To spoil the fun, here's the reason why its false. (Don't see until you are totally sure you cannot make out the goof-up)

This was discussed in Mathematical Induction II-B.

Say two students are A and B.Then according to above proof,A's name is A ,and B at the same time.The same applies to B,so we have a contradiction.So,if the proof is true,wouldn't everybody's name be Calvin/Zi Song/Abhishek/......... at the same time? :D

I think this is what we want to prove.

The mass argument (the 2nd one) does not make sense to me ; i there a typo in it?