Snow is falling vertically at a constant speed of 8.0 m/s. At what angle from the vertical do the snowflakes appear to be falling as viewed by the driver of a car traveling on a straight, level road with a speed of 50 km/h?

A train is moving at 21 km/h. If a passenger on the train runs towards the front of train at 1 km/h, what is the relative velocity of outside trees in terms of that passenger?

A plane can propel itself at a speed of 124 km/hr. If the plane encounters a 93 km/hr crosswind, what is the resultant speed of the plane? 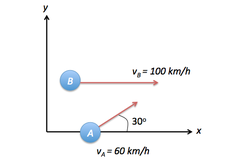 Particle A moves at a speed of 60 km/h in a direction that makes a 30∘ angle with the x-axis, and particle B moves at 100 km/h in the direction of the x-axis. Determine the approximate relative velocity of particle B with respect to particle A.