One important area is circuits, which measures how electricity flows throughout various devices. Mathematically analyzing these circuits is extremely important for evaluating their efficacy: too little power into a device and the device won’t work; too much, and the device will overload. As we’ll see throughout this quiz, linear algebra provides the toolbox for analyzing circuits.

Let’s first define some of the basic modules present in circuits. In order to get to the actual math part, we won’t go through all of them, but we’ll touch on the important ones. Let’s start our exploration by looking at voltage (rather than current just yet).

First, the basic idea is that current travels through wires, in such a way that the voltage of each contiguous segment of wire (measured in volts, or V) is the same. In other words, there is no change in the potential across any part of the wire. When two or more circuit elements meet, we refer to that point as a node. Since the potential across a given wire segment is assumed constant, we can include the wire joining two or more circuit elements in the definition of a node. For example, the following circuit has two nodes, each with their own voltage: 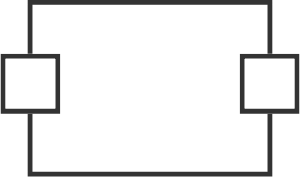 How many nodes are in the following circuit?

The main purpose of analyzing circuits is to determine which nodes have which voltages, which in turn tells us how the voltage changes across modules, and thus tells us how much voltage the module uses. 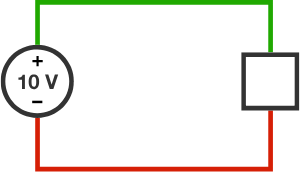 Here, the difference between the voltages at the green node and the red node is 10 volts.

Kirchhoff's voltage rule: The sum total of potential changes along a closed circuit is 0.

The circuit below contains three batteries, with voltages a,b, and c. Use Kirchhoff's voltage rule to determine which of the following must be true. 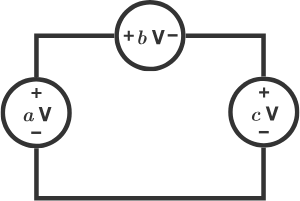 Hint: Think of traveling around the circuit once clockwise. When the wire enters a battery from the negative side and exits from the positive side, the total potential goes up by the value of the battery; when a wire enters through the positive side and exits the negative side, the potential goes down by the value of the battery.

Before we look at our next module, we have to introduce the idea of current (measured in amperes, or A). Current is the flow of electricity through wires, which can in turn power modules such as lights. As such, current travels over modules as well as through wires. 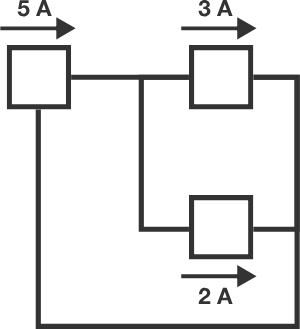 We are now ready to introduce the second major module we’ll be working with: a resistor. If we apply the same potential difference across geometrically similar conductors, very different currents can result. The resistance of a conductor (measured in ohms, or Ω), is given by iv​=R, where v is the applied voltage difference and i is the resulting current. Not all conductors have constant R, but it is usually a very good approximation in common applications.

An ideal resistor (or Ohmic conductor) is a circuit element obeying Ohm’s law v=iR, where R is constant.

As an example, consider the following circuit, which contains a battery and two resistors of strengths 3Ω and 2Ω, respectively. 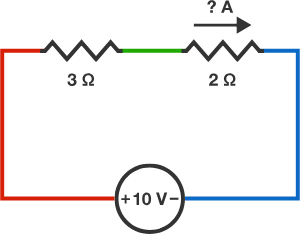 Current enters the negative side of the battery and exits the positive side as it makes a clockwise journey around the closed circuit. When it passes through the battery, the charges in the current gain potential, which has to be lost across the resistors according to Kirchhoff's voltage law.

The last few problems illustrate a remarkable fact: using just batteries and resistors, we can induce a current across a module, which allows the module to use that current for power. This is why circuits are so important!

Unfortunately, circuits are usually much more complicated than the simple examples we’ve seen here. In the next couple problems, we’ll work through a much more complex circuit--and see how linear algebra ties into the analysis.

Over the next few problems, we’ll analyze the following complex circuit:

First of all, how many nodes are in this circuit?

From the previous problem, we see there are 4 nodes. We can assume for simplicity that the pink node has 0 V voltage. This means there are three nodes we don’t know the voltage of, and thus there are 3 variables we will need to solve for. As we’ve seen previously, this means we need to find 3 equations linking them.

Recall that Ohm’s law allows us to write the currents in terms of v1​,v2​, and v3​. For instance, the current across the 50Ω resistor flowing from the red node to the green node is 50v2​−v1​​; i.e. the potential difference between the green and red nodes divided by the resistance.

In this chapter, we explored the mathematical analysis of circuits, which is integral to correctly setting up electrical systems. As we saw, using just the simple modules of batteries and resistors, we are able to induce a current that can power a lightbulb (or many other things, like the computer you are reading this on!).

As we saw, simple circuits can be analyzed “by hand,” but more complex circuits require a chunk of linear algebra to fully understand. Fortunately, the tools we’ve developed throughout this chapter reduce the problem to a systematic process, from which we can understand precisely what setup is necessary to, for example, light a bulb.