Physicists count four fundamental forces between matter particles, but none impacts the large-scale structure of the universe more than gravity. Unlike the other forces, gravity is felt by every body, large or small; it links every last atom in the universe.

Gravity was also the first force to be understood through a modern scientific model. Inaugural scientists like Galileo and Newton pieced together a theory of gravity in the 1600's that is still used in applications today. The techniques of modern astronomy arose from their desire to understand and predict the motions of planets under gravity's action. 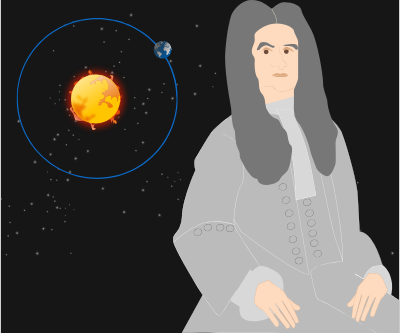 To get a feel for how gravity impacts the structure of the visible universe, let's start by calculating and comparing some typical gravitational forces in our solar system. 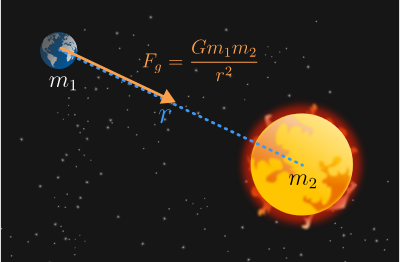 The force of gravity can be calculated from a simple quantitative law: gravity between two masses m1​ and m2​ separated by a distance r is Fg​=r2Gm1​m2​​, where G=6.67×10−11 m3/(kgs2). The distance r is measured from the center of one object to the center of the other. 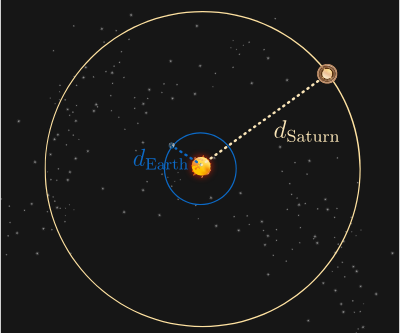 Between the Sun and which planet, Earth or Saturn, is the gravitational force larger?

Calculating gravitational forces in our solar system requires knowing MSun​, so you might wonder how astronomers first measured the Sun's mass. Putting it on a scale just wasn't an option, so they used Newton's theory of gravity, and measurements of Earth's orbital motion. Let's see how this works.

If we assume that Earth's orbit is circular (a pretty good approximation), then its acceleration a=v2/dEarth​, where v is Earth's speed in its orbit and dEarth​ is its distance from the Sun. 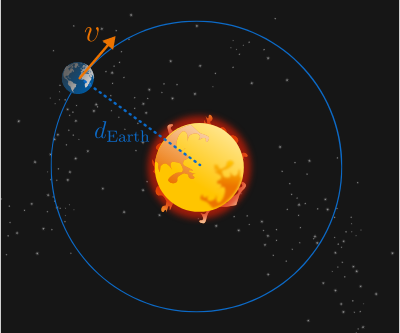 We first need to estimate Earth's orbital speed v. If Earth orbits the Sun once per 365 days on a circular orbit with radius dEarth​=1.5×108 km, what is its speed v in km/s?

Now that we have estimated the Earth's orbital velocity, a little algebra will lead us straight to the mass of the Sun.

We know that gravity is the force that pulls on Earth as it orbits the Sun, so in Newton's law of motion, Fg​=MEarth​a, we can substitute Fg​=GMEarth​MSun​/dEarth2​:

Although this relationship may appear complicated, we can solve it for MSun​, and calculate it, without any more information than we've already used.

Solve the above equation for MSun​.

Astronomers routinely use orbital motion to deduce the masses of stars like the Sun, as well as much larger objects like galaxies; however, in this course, we are more interested in gravity's role energizing stars and other celestial objects, rather than the fine details of motion under gravity's influence. 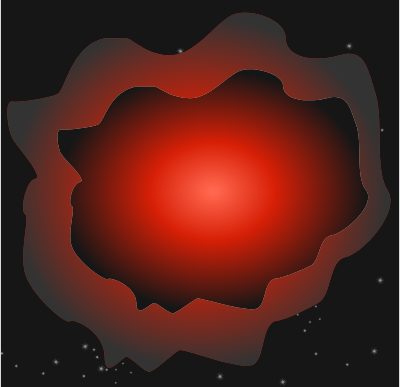 In the remainder of this quiz, we will examine the birth of our solar system from a diffuse cloud of gas and debris, leftover from a star whose existence ended much earlier in a cataclysmic supernova explosion. We will work out an important relationship between gravitational potential energy and kinetic energy—sometimes called the virial theorem—that we will employ later in this course when we examine the life cycle of a star.

Several billion years ago, all of the mass that makes up the Sun and planets in our solar system was spread out as a low-density gas mixed with dust called a nebula. 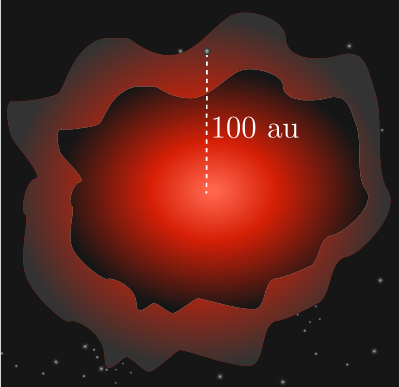 Which stage of the solar system has lower gravitational potential energy—the spread-out gas, or our solar system today?

Let's consider a 1 kg lump of metal as it is pulled from the outer fringe of the early solar system to a radius where it ultimately ends up in Earth's crust.

The metal lump is pulled from 100 au to 1 au as the nebula collapses. How much potential energy ( in MJ) does it lose, ∣ΔUg​∣? 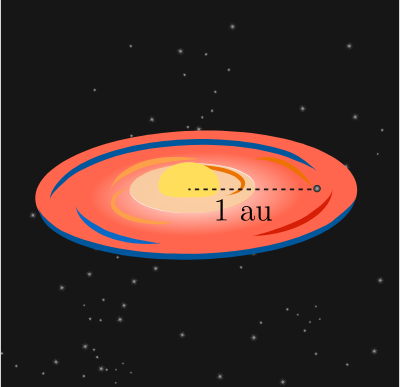 Today, the lump of metal that we've tracked is now moving along with Earth with the kinetic energy

where M is the mass of the lump, and v is the orbital speed of Earth that you calculated earlier in this quiz. 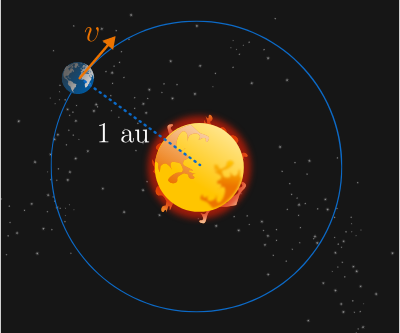 If you calculate the kinetic energy, you will find that it is less than ∣ΔUg​∣, which you calculated in the previous question. Because energy is conserved, we can assume the rest of the energy it lost was dissipated and reabsorbed by Earth as heat:

About what percent of the potential energy lost by the metal lump was released as heat?

Earth's core, which is made of a mixture of dense molten metals, including iron and nickel, is very hot. Heating initially occurred as bits of dust and gas molecules lost potential energy during gravitational collapse of the cloud. In this quiz, we've calculated just 1 kg of this material can release hundreds of MJ of energy.

We also discovered an important result that we will use several times in this Exploration. Specifically, the kinetic energy K of the metal lump was about half of the potential energy ∣Ug​∣ it lost. In fact, if we had been more careful about including the lump's initial kinetic energy, we would have found that exactly half of the potential energy was lost as heat. This statement is formally called the virial theorem. We will see in a later chapter that stars always run the risk of gravitational collapse, and the virial theorem provides us a way to understand what happens to a star's temperature during collapse.