Everything we know about the universe, we learned by sifting through bits and pieces of energy sent in our direction from far-away sources. Detecting this energy is what allows humans to unravel the mysteries of the universe while our feet (mostly) remain on the ground. 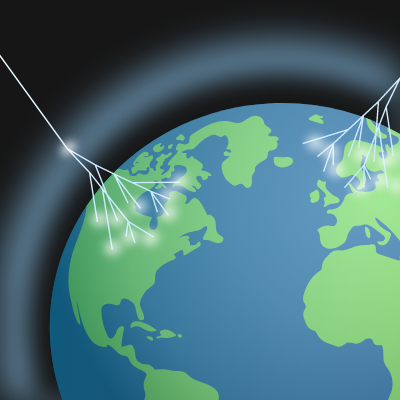 Radiation—traveling particles of matter and light—brings information about the universe to us. Radiation is a by-product of atomic and nuclear processes that carries away excess energy. In this quiz we will explore how radiation is produced, characterized and detected.

Which do you think would not be considered radiation?

The typically high speeds of radiation make it particularly useful for studying astronomical objects separated by astronomical distances. Visible light (and all types of electromagnetic radiation) travels through empty space at a rate of c=2.998×108 m/s.

Large-scale manufacturing of incandescent light bulbs began about 100 years ago, heralding the age of cheap, safe artificial lighting on Earth. 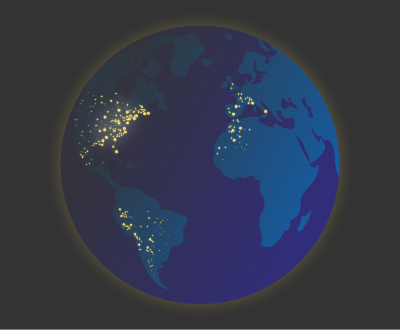 Some of the light escaped through Earth's atmosphere and is today traveling through space. How far from our solar system is the light emitted 100 years ago today?

Using a telescope, you observe light reflected from Eris, a dwarf planet in orbit beyond Pluto.

All electromagnetic radiation moves away from a radiating source at the same speed, but that does not mean all light is identical.

All radiation is characterized by wavelength, with shorter wavelength indicating higher energy. In the 20th century, physicists measured wavelengths of matter particle radiation, like electrons. This is the starting point of quantum mechanics. We will come back to wave properties of matter in a later quiz.

Types of EM radiation (x-rays, ultraviolet, infrared, visible, and radio waves) are distinguished by their wavelengths, but they are just as often classified by frequency f, the number of waves passing a point per second. Because wavelength and frequency are used interchangeably, we should learn how to "convert" between them.

What relationship tells us the frequency of a wave that has wavelength λ which is traveling with speed c?

Although we have characterized EM radiation on a spectrum of wavelengths, the energy carried by EM radiation is delivered by massless particles called photons. Experiments show that the amount of energy carried by each photon is proportional to the radiation frequency: Ephoton​=hf, where h is called Planck's constant and is equal to h=6.63×10−34 Js.

The tungsten filament in an incandescent light bulb emits visible light with wavelength 500 nm=5×10−7 m (since one nanometer is 10−9 m). 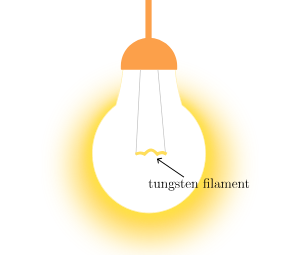 About how much energy does a typical visible photon carry?

A light bulb filament does not emit EM radiation at a single wavelength and frequency. Rather, it emits according to a distribution of wavelengths known as the tungsten filament's thermal emission spectrum. 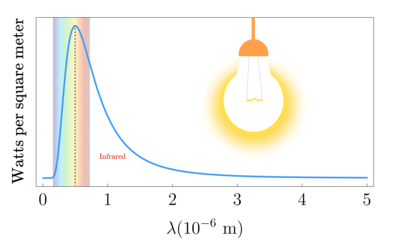 You can see that the peak of tungsten's spectrum is near yellow in the visible band. Suppose we supplied more voltage to the light bulb so that the filament's temperature increases. How would you expect the peak of the emission spectrum to change?

All matter, hot or cold, emits EM radiation—sometimes called thermal or blackbody radiation. In response to changes in temperature, an emission spectrum's maximum changes in a predictable way. 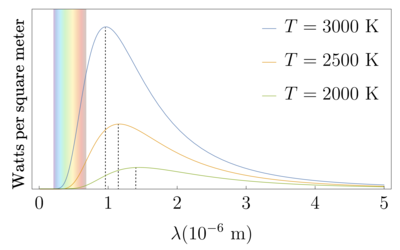 The colors of the visible spectrum are shown in a band around 0.5×10−6 m. Objects below temperatures of several thousand Kelvin emit mostly at longer wavelengths, which is why they don't glow like hotter objects.

The peak wavelength of the thermal emission spectrum λmax​ (indicated by dotted lines for the three emission spectra above) is inversely proportional to the temperature T: λmax​=TP0​​

How hot is a tungsten filament when its peak emitted wavelength is in the yellow band of the visible spectrum?

Peak wavelength of a radiating body is an easy quantity to measure, no matter how far the collected light has traveled to us. For example, the emission spectrum of the Sun is plotted below. 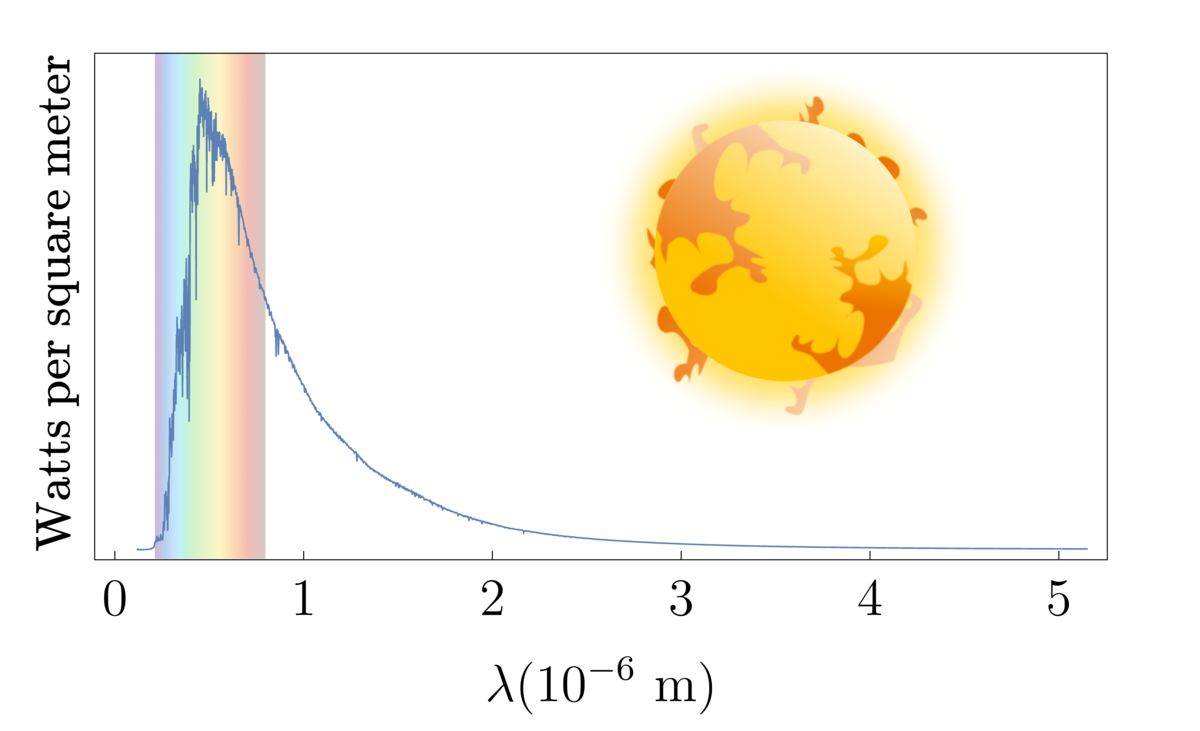 All matter emits EM radiation in different regions of the electromagnetic spectrum, depending on whether it is hot or cold. Astronomers can collect and analyze not only the visible light from stars we can see in the night sky but also light across the EM spectrum: infrared, radio, UV, x-rays, etc. In the next quiz, we will see how peak wavelengths are distributed for clusters of stars in our galaxy when we introduce the famed Hertzsprung-Russell diagram.