What images come to mind when we hear the phrase "chemical reaction"?

Many would think of bubbling beakers, fuming flasks, and maybe even the famous baking soda and vinegar volcano.

But it turns out that chemical reactions aren’t just esoteric experiments in labs — they are all around us, happening all the time! In engines, they provide the power to get around; in plants, they produce the sugars we must consume (and process by other chemical reactions) to survive; in industry, they produce the materials and products that power our economies and furnish our homes and offices.

Understanding chemical reactions provides all sorts of insights into many aspects of our lives. In this course, we’ll begin to explore the nuts and bolts of what makes them go, and even how humans have learned to harness them for the advancement of industry and civilization!

Just as when we learn a foreign language, talking about chemistry requires that we first acquire some new vocabulary to talk about reactions.

All reactions have a start and a finish, and anything present at the very start is called a reactant. What we end up with are called products. Lastly, to indicate that a reaction has occurred to change the reactants into the products, we draw an arrow from left to right.

Here's our first chemical. It's a sugar, called glucose. 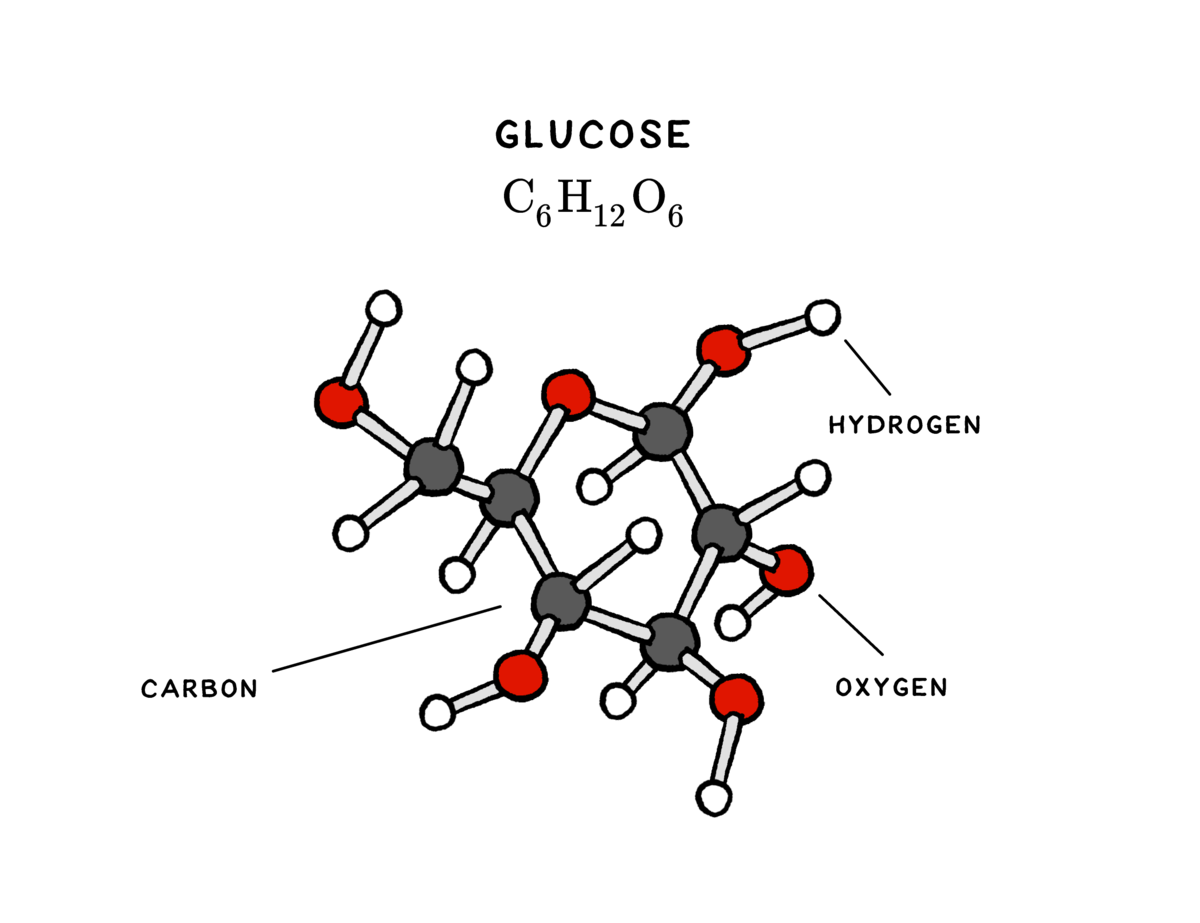 The black, white, and red spheres that make up this sugar are individual atoms.

Atoms can come together in countless arrangements and ratios, but when they come together in exactly the way shown above, this is the arrangement we can call a molecule of sugar. In a single teaspoon of glucose, there are billions of molecules, but in each one all the atoms are arranged the exact same way in space and in the exact same ratio. Remove any of the atoms or change the way they are connected to each other, and it wouldn’t be glucose anymore!

Chemistry is ultimately a game of molecules, changing and transforming in grand dances we call reactions, but in any reaction there are some things that change while others remain the same.

Let's look at a model of a real molecule undergoing a reaction (in this case, the break up of calcium carbonate). The spheres represent atoms, and their color denotes what kind of atom, or element, they are.

Atoms are the building blocks of all matter, and all atoms of a specific element have the same behavior.

In the course of this reaction from reactants to products, what is not changing?

We’ve seen that chemical reactions cannot change the fundamental identity of the atoms involved — for example, no reaction can turn lead into gold. But what exactly determines the “identity” of an atom? We may know intuitively that an oxygen atom is different from, say, a carbon atom or an aluminum atom, but what makes them different?

To understand this difference, we need to zoom in and explore what atoms are made of: 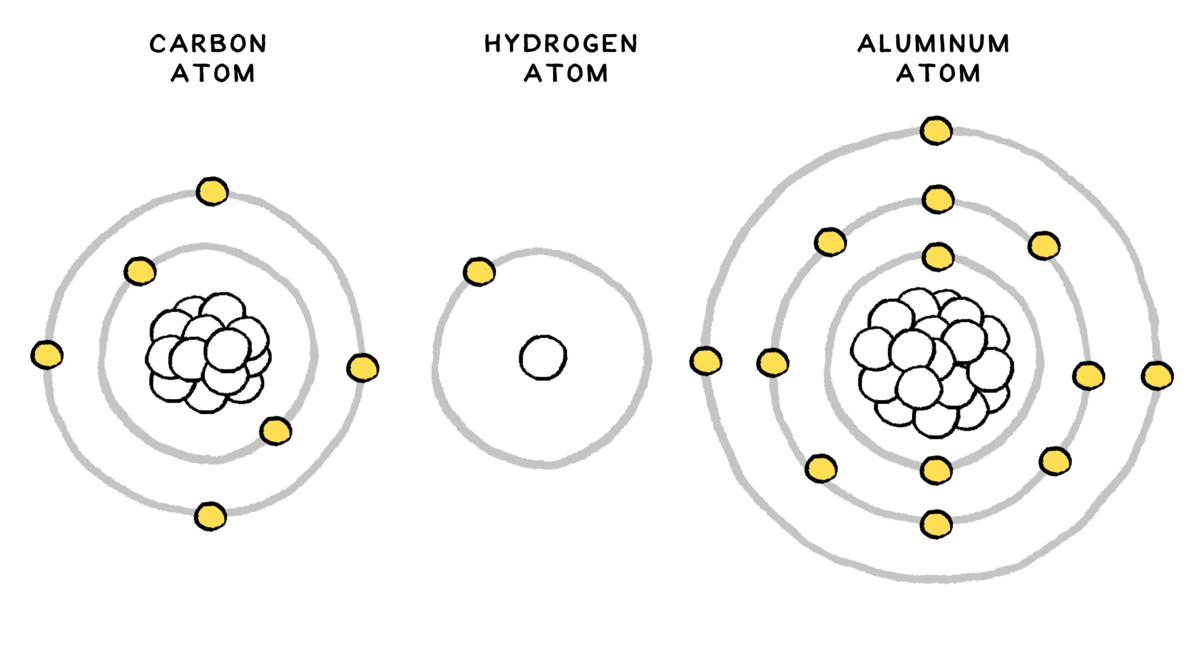 Note that this conceptual representation of atoms is convenient for this discussion, but the true nature of the atom is more complicated — were we to zoom in on a real atom, we'd see quite a different picture!

Each atom consists of two major parts: the electrons and the nucleus. The electrons exist in a cloud around the central nucleus. Atoms are overall neutral, but a single atom can contain many negatively charged electrons.

What does this imply about the nucleus?

The nucleus at the center of the atom is so stable that it can't be changed by chemical reactions. This is because chemical reactions involve the electromagnetic force which is weak compared to the strong nuclear force that holds the nucleus together (as you can tell by its name).

So, what is changing, then?

As we work through ever more complicated examples of reactions, a trend will emerge: electrons are the name of the game. When we boil down even the most sophisticated reactions going on in industry, nature, and our bodies, it all comes down to the electrons!

Understanding where the electrons are in molecules and where they tend to go is one of the most important tools allowing chemists to make useful and accurate predictions about reactivity. Electrons change hands like money during reactions, so we can think of them as the "transactional unit" of chemistry. 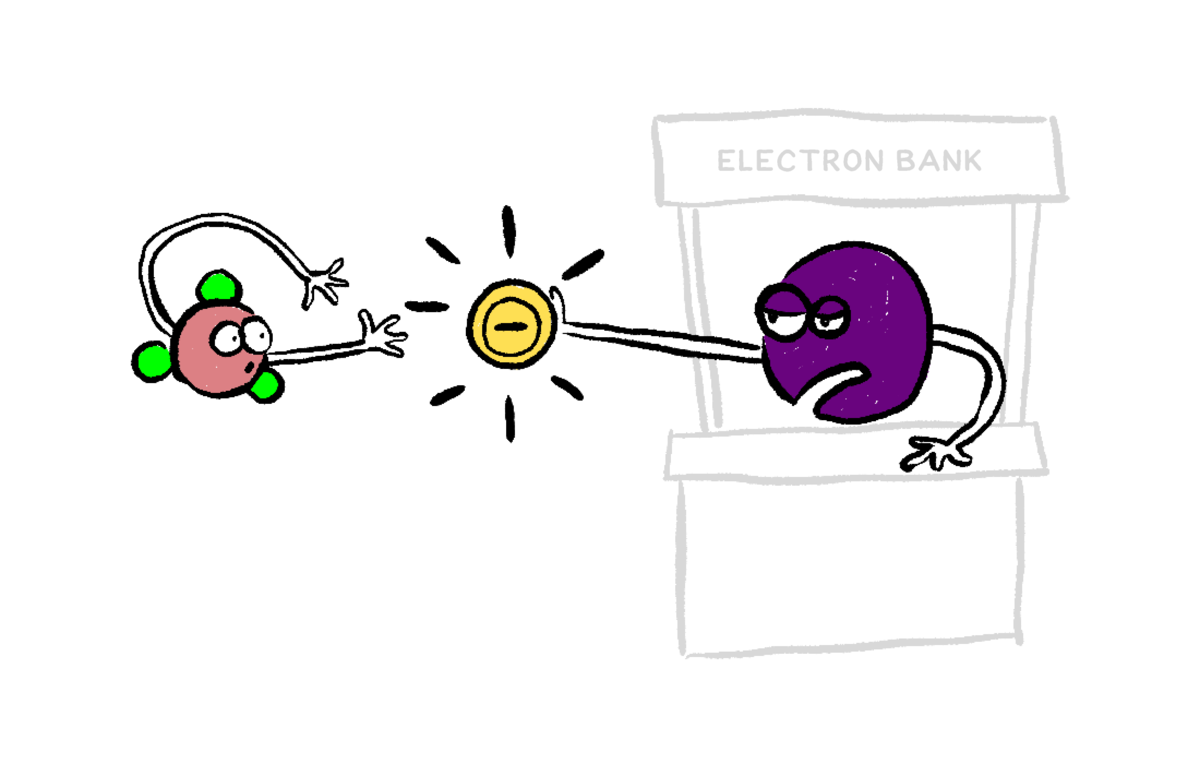 For this course, reactions are all about electrons. But what sorts of things happen to atoms during these transactions?

For now, we won't concern ourselves with the goings-on of atomic nuclei. To keep things simple, we'll continue to treat atoms simply as spheres. Remember, reactions are all about the electrons!

Suppose that, during a chemical reaction, a neutral oxygen atom were to gain two additional electrons. What could we say about the new state of the atom?

As we have just seen, reactions can add electrons to or subtract electrons from an atom, which results in a negative or positive charge, respectively. The charge of an atom is indicated by writing it next to the atom's symbol.

For an oxygen atom, whose symbol is O, we could represent the double negative charge like OX2−.

Table salt (sodium chloride) is represented by the formula NaCl, with Na representing a sodium atom and Cl representing the chlorine atom. (letter symbols like these are used the world over to unambiguously represent specific elements.) They are bound together to form a compound, but what happens if we could split the atoms apart?

It turns out that this is pretty easy and can be accomplished by adding water:

Recalling what we discussed about atomic structure and representation of charges, how might we best describe what happens when these two atoms are broken apart in this way?

Of course, even without much experience reading chemical equations, the last equation NaCl+HX2​O​NaX++ClX−+HX2​O probably seems a bit redundant.

This raises an important point. Chemical equations are algebraic, in that anything that appears in exactly the same form, unchanged, on both sides of the equation cancels out. In this case, water is not fundamentally changed in the reaction, so the correct version of this equation looks like this:

We can conceptualize the reaction that splits NaCl as an electronic "transaction," without involving the nucleus of either atom. Let’s take one more look at the equation for this reaction:

What can we say about the total amount of charge that exists before the reaction and after the reaction?

The idea that the total charge of all molecules has to be the same before and after the reaction is one of the foundational principles of chemistry.

What this means is that while electrons can and do change hands during the course of reactions, what they don’t do is to go flying off into outer space somewhere, nor do they simply "poof" into existence.

We’ll revisit this principle later in the course, but it gives us the power to determine at a glance whether a reaction is feasible — even reactions we’ve never seen before.

In this course, we’re going to expand our understanding of chemistry by examining the behavior of atoms, and particularly the electrons that dance among them in the fascinating choreography we call chemical reactions. We’ll also see that no matter how large or complicated a molecule becomes, it must rely on the very same foundational principles of reactivity as single atoms themselves.

Below is a representation of another reaction, this time undergone by a molecule of our friend glucose from before. Despite its complicated appearance, careful accounting reveals that it follows all the rules we’ve established for chemical reactions so far: 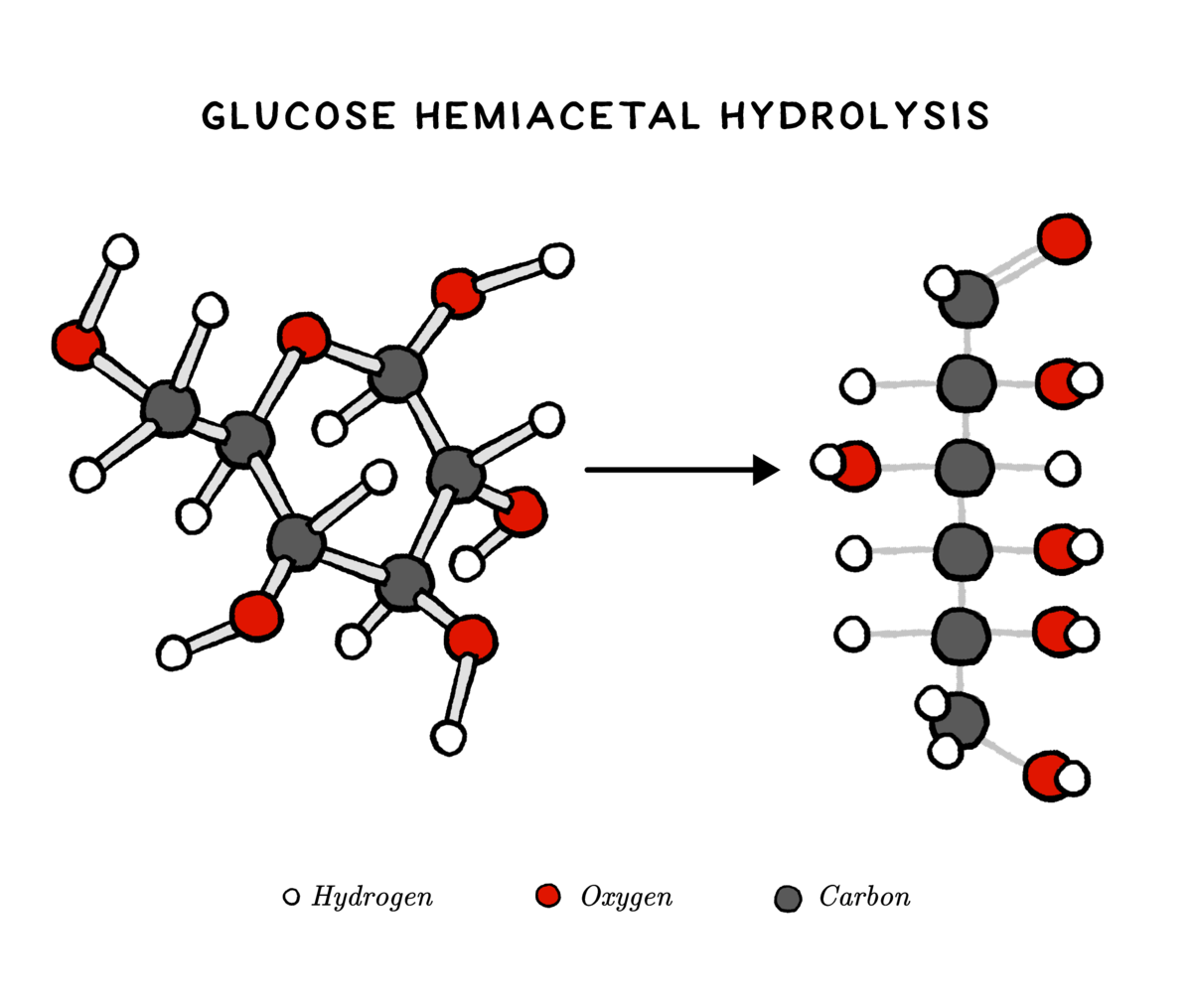 Next, we’ll "zoom in" and explore the nuts and bolts of what’s really going on in a flask when we say that two chemicals are "reacting" with each other.