Here is a mysterious message:

Can you decode it? What does it say?

The "letter-shift rule" from the previous problem is an instance of one of the very first secret ciphers used in history: the Caesar cipher. (Julius Caesar himself used it in his private notes.) It replaces each letter by another letter a fixed number of places further in the alphabet. For example, in a Caesar cipher with shift 2, A becomes C, B becomes D, C becomes E, and so on. The last letters Y and Z "wrap around", becoming A and B, respectively: 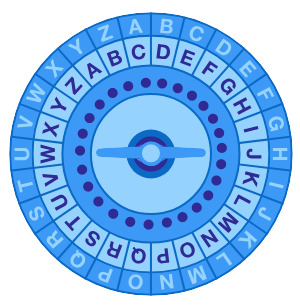 If in a given Caesar cipher, A gets encoded as M, as what letter does P get encoded?

One very important application of programming is the analysis and visualization of data. These can be experimental measurements, survey results, images, video, network traffic, …

In recent years, Python has become incredibly popular among those who deal professionally with large amounts of data, because it is a simple yet enormously powerful language. It gains this power from thousands of freely available packages of commands, known as modules. You have used one such module, called turtle, already for drawing. Now you get a peek at a more advanced drawing module, called matplotlib, that is professionally used for data visualization.

In this quiz, you will visualize the distribution of letters in a coded message in order to decipher it. 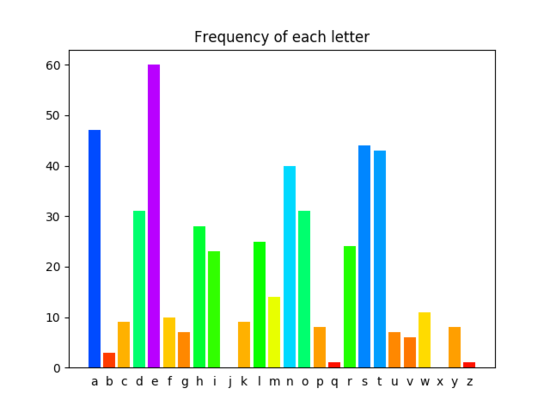 Distribution of letters in a typical English text: E is the most frequently used letter.

The following program implements a Caesar shift of 2 and applies it to the first few lines of The Raven by E. A. Poe. What letter appears most often in the coded text?

Hint: What is the most frequent letter in a typical text in plain English?

Below you see two strings of letters. Both seem random, but one of them is a meaningful text encoded with a Caesar cipher. One way of telling coded messages apart from random noise is to look at the letter frequencies: if a few letters appear significantly more often than the rest, as is usually the case in written language, then the text is most likely not randomly generated.

To help you decide which text is which, here is a program that can show how often each letter appears as a bar graph. Copy each text into the indicated line and run the program to see it.

Which text contains a secret message?

Copy and paste either text here to replace this placeholder text. (Make sure not to remove the triple quotes.)

If we know that a particular text has been encoded using a Caesar cipher, there still remains the task of finding out the amount by which the letters have been shifted. One method is to look at the most frequent letter in the text: it probably stands for the most frequent letter in the plain message, which in English is usually E. From that you can deduce the shift and decode the message.

What needs to be the case for this method to work with reasonable chance of success?

Here is the Caesar-shifted secret message from before. Judging from its letter distribution, by how many places has it been shifted?

Copy and paste either text here to replace this placeholder text. (Make sure not to remove the triple quotes.)

Now it is time to crack the code! From the shift determined in the previous question (10), you can decode the message by applying the reverse shift (i. e. by –10). Below is the relevant program from the start of the quiz. Edit it accordingly.

What is the message about?

Adjust the amount of the Caesar shift here.

Code-breaking is just one application of handling (text) data and visualizing it. Later chapters dive deeper into a plethora of data analysis techniques, as well as other aspects of data science such as randomness and simulations.