Somewhere not so far away, a coil of wire is spinning near a set of magnets. This device — called an electric generator — produces the electricity that allows you to read this quiz.

Electricity animates our society. Almost everything we do each day, every machine we use, relies on electricity in some way. But how exactly is electricity generated? How do electrical devices move? And magnets — how do they work?

The theory of electromagnetism addresses these and many other questions. It touches all things, natural and manufactured, from the magnetic field that envelops Earth and the light streaming across the universe, to the signaling between cells in your brain.

The theory consists of four laws — Maxwell's equations — and the purpose of this course is to untangle their physical foundations.

People have fiddled with magnets for thousands of years. Indeed, they can be a quasi-mystical experience.

But they have other uses. As early as AD 1050, Chinese sailors used magnetic lodestones to navigate the sea.

More recently, civilization has come to rely on electricity, most of which is generated with magnets. And magnetic forces play a starring role in everyday devices like motors and speakers.

Permanent magnets have two poles, north (N) and south (S), that respond to other magnets. If you bring two magnets together, poles of the same kind (e.g. north-north or south-south) push each other apart, while opposite poles (e.g. north-south) attract each other. 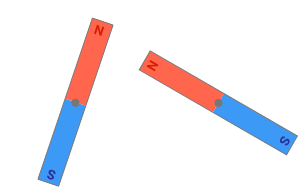 Imagine two magnets are pinned at their centers and are free to rotate. Beginning in the orientations shown above, you release them and they rotate until they settle into fixed positions. Which orientation is more likely once they stop moving?

The puzzling thing about magnets is that they push or pull on each other without making direct contact. Based on this, we say that magnets are surrounded by a magnetic force field or "magnetic field." The magnetic field acts as a messenger between interacting magnets.

Right now, the idea of an invisible entity filling the space near a magnet might seem pretty fantastical. Exploring the workings of fields, both magnetic and electric, is one of the objectives of this course. Along the way, you'll encounter many examples of how fields are integrated into our everyday devices and, at the end, you'll understand how these fields carry energy from one place to another.

Although they never touch the magnet, iron filings (light shards of iron) near a bar magnet form a visible pattern in the magnetic field.

For the time being, we will treat the magnetic field of a permanent magnet as an observable, but unexplained, phenomenon.

What do magnets have to do with electricity? A compass needle is a tiny magnetized bar, which is intended to point in the direction of Earth's magnetic field.

In the 1820s, the scientist Hans Christian Ørsted noticed that a compass needle was deflected from magnetic north when it was near a coil of wire connected to a battery.

Here, the compass needle points in a different direction when the switch is flipped, suggesting that magnetic fields are produced by the flow of electricity.

Later in the course, we'll discover that a coil of wire wrapped around a wooden core behaves a lot like a bar magnet, as long as the coil is carrying electric current.

Suppose you held the north pole of a permanent magnet up to each end of an electrified coil of wire. What would happen?

In the aftermath of Ørsted's discovery, inventors started to design electric devices that move (like speakers and motors) by running currents near a magnet to generate force. 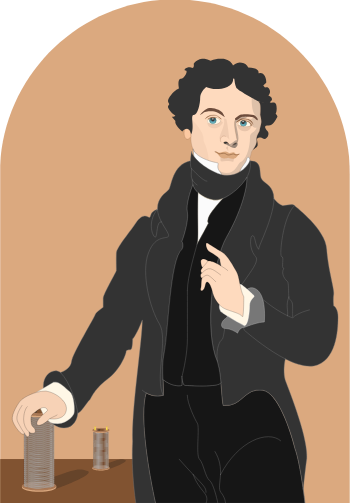 Around the same time, a young English physicist named Michael Faraday was considering the relationship between electricity and magnetism from a different angle.

He was captivated by a question that was, in some sense, the flip side of his colleagues': "How can magnetism produce electricity?"

Faraday envisioned a device that would produce a flow of electricity using magnets. Today this device is known as the electric generator.

In one of his experiments, Faraday made two wire coils, one small enough to fit within the hollow core of the larger one. 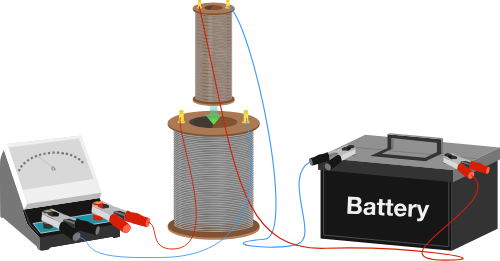 He ran electricity in the smaller coil by connecting it to a battery.

The larger coil was connected to a device that measured the electric current flowing in it, called a galvanometer, but it was not connected to any electric power source.

In other words, the large coil with a galvanometer could not produce any electrical current of its own.

Faraday made two important observations about the setup shown above:

What could explain this effect?

Faraday discovered that moving sources of a magnetic field (such as a dropped electrified coil of wire or a rotating magnet) can generate electricity in place of a chemical battery. This bedrock principle is used to generate almost all of the electric power we use across the globe.

To illustrate the simplicity of Faraday's discovery, the content team at Brilliant built our own basic electric generator and used it to light a small LED at Brilliant Labs:

Electric generators are only one of many useful applications of Faraday's law of induction, which we'll explore in detail later in this course.

The relationship between electricity and magnetism was discovered by chance — Ørsted happened to observe his compass needle jumping during an electricity demonstration.

Just like Newton's theory of dynamics, the modern theory of electricity and magnetism ultimately rests on observations and experimental tests. Without these, many of the results contained in this course would be incomplete.

To help make the case for the physics of electricity and magnetism, we have filmed some of our favorite demonstrations for you.

We'll return to Brilliant Labs throughout this course to illustrate important electromagnetic phenomena that you can try for yourself at home. There's no better way to understand electromagnetic concepts than to see them in action!

Beneath the workings of a basic electric generator lies much of the physics we'll explore in this course: 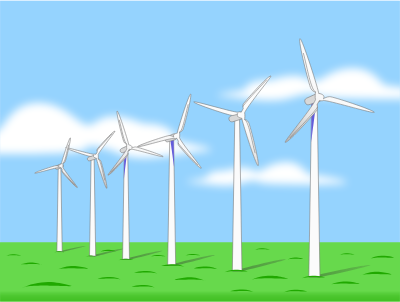 However, we have a bit to unpack before we can understand what's happening physically within a generator and other electrical devices.

Our first step will be to introduce the principal actor in the physics of electromagnetic fields: electric charge.