Physics of the Everyday

Breaking news!—The Baltimore Sun, CNN, Fox, and others are reporting that Baltimore's streams are tainted by amphetamine—a nervous-system stimulant that is used in recreational setting and also is prescribed to treat the symptoms of attention-deficit disorder. Experts blame a leaky sewer system; reporters infer illicit users are dumping drugs down the toilet. In its article, "Your Drain On Drugs", CNN reports that six Baltimore County streams tested positive for amphetamine.

Is amphetamine in the water supply a potential health hazard, or is this story a product of a supercharged news cycle desperate for views, likes and clicks? As we explore this eye-popping story, we will introduce the so-called back-of-envelope style of calculating that you will encounter often in this course, which emphasizes general number-sense rather than precision.

The CNN article refers to a research study that measured drug contaminants in Baltimore’s surface water. The researchers found that the most contaminated stream contained 630 ng/L of amphetamine. In this quiz, we will interpret the researchers' measurement and weigh whether it poses a health risk. 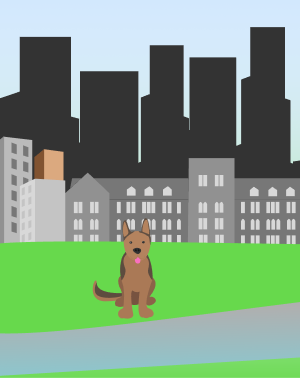 This measurement is a concentration rate that tells us a 1-liter volume of water contains 630 nanograms of amphetamine. This is a pretty small mass, but if your dog drank from the stream, would it be large enough to have an ill effect?

Answering this question depends on how small a nanogram is. It turns out that one gram (about the mass of a small paperclip) is 1 billion (1000000000) times larger than 1 nanogram.

To get a feel for this difference in scale, which of the choices is about a billion times larger than a paperclip? 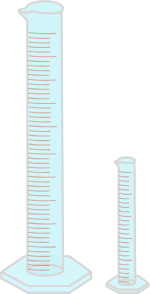 Baltimore water contains a small amount of amphetamine, 630 ng, in each liter they sampled, according to the research study.

A liter is just one of several different units of volume the researchers could have selected to take their samples. Another common unit is a milliliter, which is 1000 times smaller than a liter.

If you sampled water with an amphetamine concentration of 630 ng/L, how much amphetamine would be in a 1 mL sample?

In 1 L of water, the researchers measured 630 ng of amphetamine. This is an unthinkably small mass, so let's put this concentration in terms we can picture. 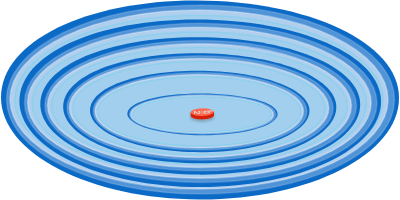 A typical, therapeutic dose of amphetamine is 10 mg. Imagine you crushed up this amount and dissolved it into a volume to water so that it contains the same concentration the researchers measured. How much water is in the volume?

Perhaps we can find some comfort in the answer to the last question. The concentration rate of amphetamine needed to induce a physiological response in a human is about 10 mg dissolved in 5 L of blood, and 630 ng/L is nowhere close to this critical concentration.

But the question still stands: short of people accidentally spilling their amphetamine prescriptions into streams, how does any amount of amphetamine contaminate the surface water?

Another way for amphetamine to enter the environment is through wastewater. The body doesn't fully metabolize a full dose of amphetamine; in fact, for each person who takes amphetamine, about 50% of every dose is excreted in urine. Baltimore is a city of 700000 people where about 15% of the population takes a daily 10 mg average dose of amphetamine.

Estimate the mass of amphetamine that is in Baltimore's wastewater each day.

Cities the size of Baltimore are laid out so that all wastewater flows to a central treatment facility where solids are removed, and the water is filtered so that it can re-enter the water cycle.

Perhaps surprisingly, we’ve estimated that the concentration of amphetamine the researchers measured in the surface water is roughly the same concentration we would expect in raw sewage.

Of course, this may be just a coincidence. On the other hand, exposure to raw sewage is a known health risk. Regardless, using simple estimates, we've shown in this quiz that amphetamine contamination at a concentration of 630 ng/L would probably be pretty low on your list of concerns. The risk of severe bacterial infection would be a more viable risk.

Nonetheless, other smaller organisms, like algae, may be affected by this concentration of amphetamine. In this quiz, we used some basic quantitative tools (back-of-envelope calculation, rates, percentages, and units of measurement) to focus on the health risk for humans. The reporting hype didn't measure up to the actual risk, but you could use these same tools to gauge the effect on other species.