For as long as cars have been around, people have been racing them. We begin our classical mechanics training to the thunderous sound of engines.

In this quiz, you will have a front seat at one of the world's premier auto races: the Monaco Grand Prix, a renowned race on the hilly streets of Monte Carlo. 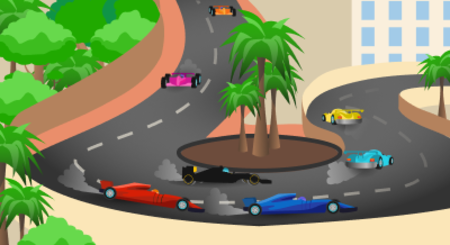 A modern Formula One racecar is a conglomeration of precisely machined moving parts. Classical mechanics is a framework for unraveling the forces at work in a wide class of mechanical systems, and the design of a Formula One racecar is a microcosm for this interplay of forces and dynamics. The uniformity of these rules across systems and scales makes engineering new machines possible and provides a systematic path toward optimizing them.

In classical mechanics, you'll add these rules to your toolbox and apply them to a vast array of machines and systems. For example, by the end of this quiz, you'll be able to explain why Formula One cars can take sharp turns much faster than ordinary automobiles without skidding off the road.

You are on the pit crew of an esteemed race team, and you are making a final check of the vehicle as it starts the warm-up lap before the race starts.

Few components of a racecar are more important than the tires. The driver steers the car onto the circuit as you carefully watch the tires rotate in case any adjustments are needed.

When the car is moving forward, in which direction do the wheels turn?

Classical mechanics is focused on interactions and their consequences. For example, the tires and the road surface mutually push on each other. In other words, they interact. Specifically, the road surface provides some resistance to the spinning tires called friction that pushes against the tires.

As long as the contact — or "grip" — between the tires and the road surface is strong, the force of friction acting on the tire propels the car forward.

What happens if the tires did not make an adequate grip on the road? Select all possible answers.

The hairpin turns of the Circuit de Monaco are where the tires' grip really counts. During the warm-up lap, your team’s driver is approaching Turn 6, a hairpin bend around 180∘ infamous for dashing the chances of a Monaco Grand Prix victory for many skilled drivers over the decades.

Your team's driver takes the turn at a constant speed. Which direction does the force of friction act on the tires to keep the car on its trajectory around the curve? 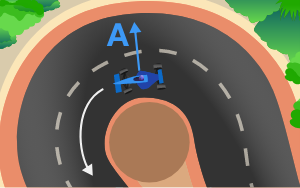 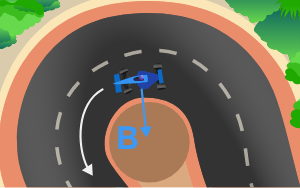 We've seen that in racing, friction is important—it's literally the driving force that lets your team's driver direct the car. But at race speeds, other forces compete with friction to influence the car's motion.

Intuitively, two forces add or subtract depending on whether they push in the same or opposite directions. If you've ever pushed a piece of heavy furniture, you know it's easier when you put it on wheels first, which reduces friction pushing against you. With this in mind, which requires a greater force from the engine: accelerating from 0 km/h to 50 km/h, or accelerating from 50 km/h to 100 km/h?

At high speeds, air flowing over and around the car can produce significant forces. Sometimes these forces can cause the driver to lose control.

For example, differences between the flow rate of air over and under the vehicle can cause lift (the same principle that an airplane exploits to fly) and affect the grip between the tires and the road. This is particularly dangerous as the cars navigate certain turns of the Circuit de Monaco much faster than commercially available vehicles would. 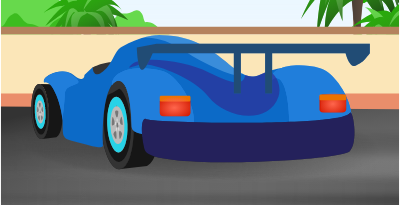 But Formula One cars have an ingenious feature: wings attached to the body similar to an inverted airplane wing. How can strategically placed wings enable F1 cars to go faster around turns?

Sometimes the laws of physics are portrayed as a set of limitations that the inventions of our imaginations must abide by—as if obeying these laws is somehow the cost of existing in the physical universe.

In fact, the converse is much closer to the truth. The principles of physics you will learn in this course will let you, like many other scientists and engineers, unlock the hidden potential of matter and energy around you. As evidence, remember the Formula One car. Understanding how air flows around the vehicle led directly to the wing designs that stabilize the vehicle around turns by producing additional downforce.

In this quiz, we've entirely ignored the forces internal to the vehicle (for example, the torque on the driveshaft, axles and various gears). We've looked instead at some of the external forces: friction, air drag, and "grip" which later in this course we will call normal force or normal reaction. We'll go much deeper in later chapters, but in the next quiz, we'll look at some broad features of all physical theories.