To talk about gravity, we need a solid conception of mass itself. In Newtonian gravity, mass appears in two central roles, which we will discern in this quiz:

When we are calculating the effects of gravity on a falling object, mass takes on both roles simultaneously. In no other classical theory is one quantity endowed with two interpretations; in fact the mysterious dual role of mass is the point of departure for Einstein’s celebrated theory of gravity, general relativity.

Without further ado, let’s begin our exploration of gravity with the mystery of the white room. 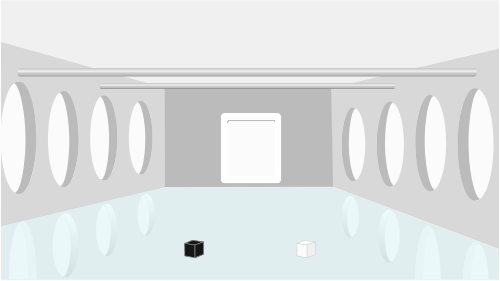 Your eyes blink open in an intensely white room. Beside you lay two cubes, one white and one black. You have no idea how you got here. You shakily lift yourself from a supine position. 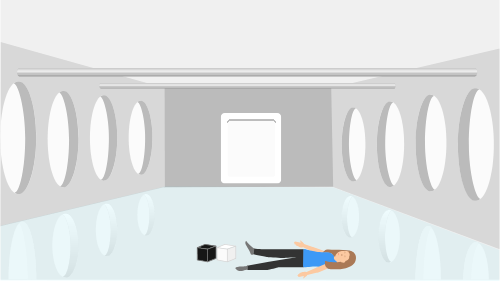 A syrupy voice informs you that you have fallen into a sensory test chamber. Beside you, one cube is real matter and the other is a sensory distortion.

"What?" you yell, but there is no response.

You examine the cubes, picking up one in each hand. They both feel pretty real to you.

Suddenly, the voice says menacingly: "This test will end only if you can name the cube that is not real. You get one try."

Startled, you drop both cubes. 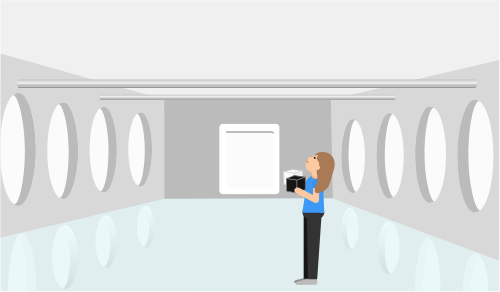 Both cubes fall from the same height with identical initial speeds. They do not hit the ground at the same time. Are their accelerations identical or different?

Gravity is the force that causes objects to fall on Earth's surface, and is the subject of this course. Gravity's action is a major consideration in how we choose to manipulate the objects around us; it is also responsible for sculpting our solar system and the larger universe. Progressing through this course, you will examine gravity's effects on successively larger scales, and learn about gravity's many faces.

Gravity always acts between pairs of objects. In the white room, gravity is acting between the Earth and each block as it falls.

The acceleration due to gravity depends only on one mass in the pair. Which one? 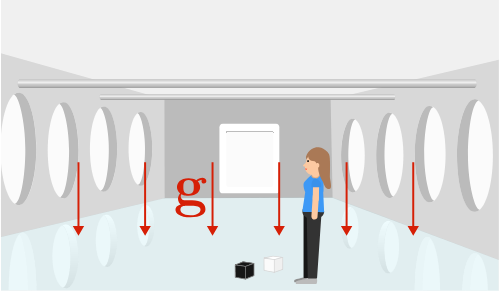 What force Fg​ would produce this acceleration on a mass m during free-fall near Earth's surface?

To begin testing for differences between the cubes, you attach a string (from your pocket) to both cubes, and hang them over one of the horizontal supports above you to compare their weights.

It turns out they balance; neither one accelerates when you let go. 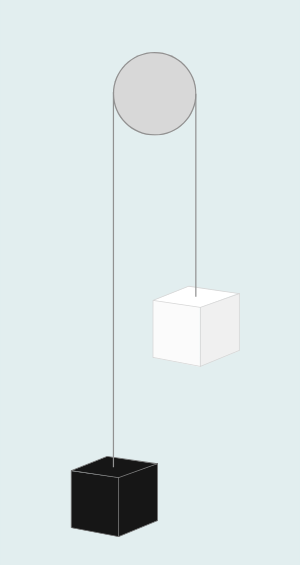 Before, you observed a difference between the cubes while they were moving, so you decide to tie the string tightly around the horizontal support. The cubes can now swing like pendulums. 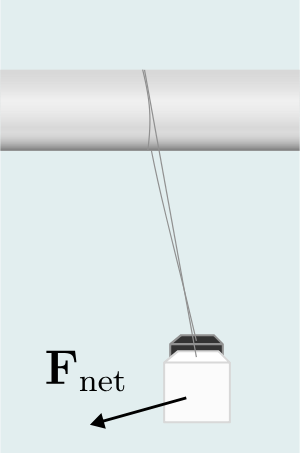 You may recall that this oscillation results from an imbalance between weight (which you already deduced is the same for both blocks) and a tension force acting along the string.

If you pull both blocks back to the same height and release them, which block feels a larger net force Fnet​ the instant you let go?

After you let go, the cubes swing back and forth (without rotating or bumping each other) and you notice that the white cube has a distinctly longer oscillation period.

Thus, one of the cubes has larger maximum acceleration than the other. Which one?

Both cubes have the same weight in Earth's gravitational field, yet they have different accelerations under the same net force. One of the cubes is violating the ordinary Newtonian physical rules, but which rule?

In our testing, we have identified two roles of an object's mass m:

The equivalence principle asserts that an object's gravitational mass is identical to its inertial mass. This is an often-overlooked postulate of Newtonian physics derived from observation. Perhaps surprisingly, it is not derivable from Newton's laws!

You cannot identify which cube is real without comparing the cubes to another object with a known physical existence.

Fortunately, in your pocket, you carry a lucky (and very real) coin. You lay it on top of the black cube, then you drop the cube. The cube and the coin do not fall together. 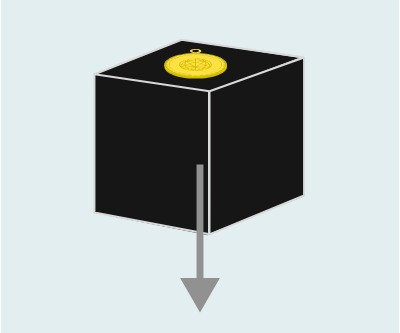 Which cube is real?

You call out your deduction, and the door opens flooding the room with red light. You slowly walk across the threshold. 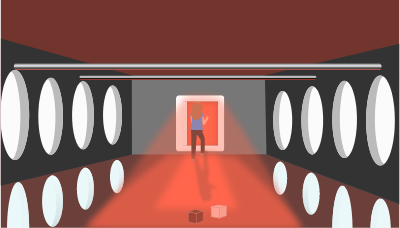 Gravity's grip extends far beyond Earth's surface. It pulses through the emptiness of space, sculpting unfathomably large galaxies around objects so massive that light cannot escape from them. Mass is both the source and the subject of gravity's action. How mass is distributed throughout the universe is inexplicable without understanding gravity's action.

This course is your portal to understanding gravity's far-reaching effects. The focus of this first chapter is to introduce Newton's revolutionary idea of a universal force between masses.