From the point of view of a running program, memory can be understood as a long tape of bytes, and the program can read from or write to certain places on the tape. There are two concepts that we need to know: 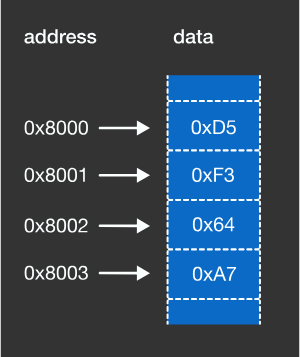 Since one byte can hold values no larger than 255, we often work with integers that span multiple bytes to hold larger numbers. For example, we need at least 2 bytes of memory to represent the number 43690, which is 0xAAAA in hexadecimal. 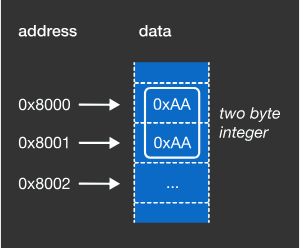 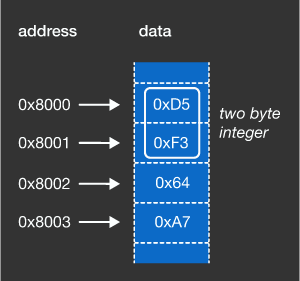 Given a little-endian computer architecture, and memory that looks like the above diagram, the address 0x8000 and 0x8001 together are used to describe a 2-byte integer. What is the integer in decimal (base 10)?

This method of displaying memory is called a hex dump and is quite common in debuggers, packet sniffers, hex editors and the like.

What is the memory address of the red bolded byte?

The x86-64 architecture is little-endian. Below is a memory dump from a computer running on this architecture: