As humanity has come of age as a civilization, we’ve had to come to terms with a disconnect between how our gut tells us the world should work, and the way the world actually works. Geocentrism is a common example of this: the core belief that humanity must be special, and by association the Earth must hold a special place in the cosmos. Instead, as we’ve learned more and more about the universe, we find ourselves in an unexceptional arm of a standard spiral galaxy, of which there are billions in the visible universe. 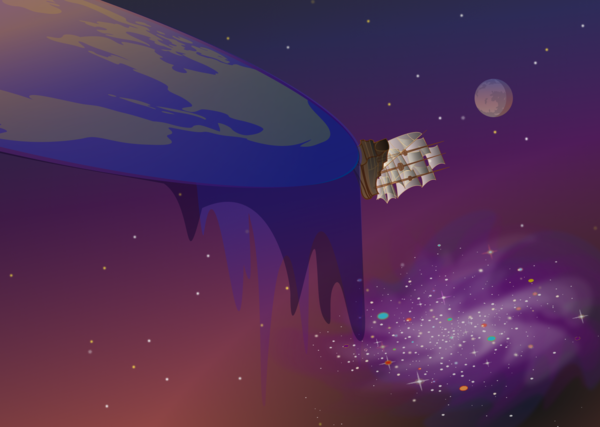 Some gut feelings have proven remarkably difficult to shake, and have come back into the minds of people thousands of years after they’ve been disproved. The most common example is the so-called “Flat Earth Theory”, which has experienced a resurgence in popularity with internet trolls in recent years. Whether this renaissance of a disproved theory is solely due to internet trolling is difficult to confirm. After all, no matter the scientific evidence and videos from space, if you put a level on the ground it appears flat, and if you look around your neighborhood, there is no curvature to be seen.

But even if you only believe what you can see, all it takes is a bit of geometry and basic physics to prove that the Earth is a sphere. Just remember: don’t feed the trolls.

The Flat Earth “theory” that has taken hold recently in some corners of the internet is actually not a theory at all, strictly speaking. Flat Earthers actually have a collection of models, many of which may contradict each other. Each is crafted in an ad hoc fashion to explain why one or two particular scientific observations that seem suggest a round Earth really "prove" a flat Earth.

Even though they’re not consistent, we can paint a general picture of the Flat Earth “theory”: 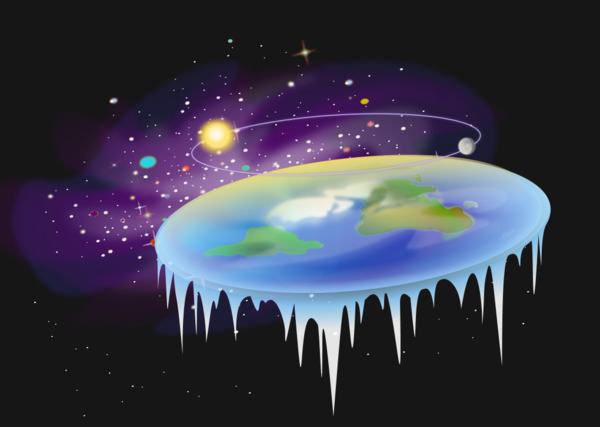 Across most Flat Earth theories, the Earth is a disk with the North Pole located at the center, and the South Pole is actually an impassable mountain range that runs the perimeter of the Earth’s disk. The Sun and Moon rotate at a fixed distance above the Earth, and shine like spotlights on the surface, creating the appearance of day and night.

To those of us who live in the real world and acknowledge that Earth is a sphere, the evidence is all around us. We’ve all observed eclipses, videos and photos from space, and perhaps even seen the horizon recede as we take an elevator up a tall building.

Consider lunar eclipses, which occur when the Earth passes between the Sun and Moon. The circular shape of the Earth’s shadow seems like irrefutable evidence for a spherical Earth, but is this observation robust to Flat Earther scrutiny?

Note: some Flat Earthers believe that Earth never passes between the Sun and Moon, but for the sake of this question, assume that it does. 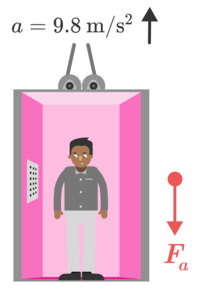 The shape of Earth’s shadow during a lunar eclipse is a common, seemingly obvious observation in support of a spherical Earth. But the equally common refutation that a disk-shaped flat earth would also cast a circular shadow should teach us a lesson: just because an observation supports one theory, doesn’t mean it can’t also support another, incorrect theory.

Consider a triumph of classical physics: Newton and Einstein’s laws of gravity. These theories predict a constant gravitational acceleration on the Earth’s surface towards its core, due to the gravitational field of the Earth attracting any nearby objects.

In most Flat Earth theories, gravity is explained in a much more pedestrian and intuitive way: When do you feel accelerated in everyday life? In an elevator. When an elevator accelerates up with acceleration a, anyone inside feels a downward force Fa​. This familiar experience is used to explain the appearance of gravity on Earth — it must be accelerating upwards at exactly 9.8 m/s2.

Can we disprove this explanation?

Let’s say you wake up in a rocket with no windows designed to accelerate at 9.8 m/s2, unsure whether you’ve taken off from the Earth yet or not. Can you devise a practical experiment that could distinguish the force from acceleration Fa​ and the force of gravity Fg​? 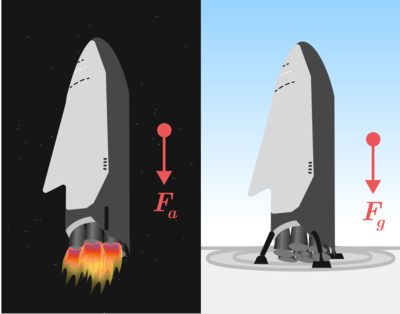 Two thousand years before Newton or Einstein, the Greeks were busy using the newly understood mathematics of angles and geometry (or "earth-measure" in ancient Greek) to nail down the shape and size of the Earth.

Eratosthenes is credited with inventing the discipline of geography. In the old world, the cities of Alexandria and Syene in Egypt each had a famed deep well to provide the city’s water. Most of the time, the very bottom of the wells are dark since the light from the sun enters at an angle.

On just one day a year, at the moment of the summer solstice, Eratosthenes noticed that at noon the Sun appears directly overhead, lighting up the bottom of the well in Syene.

Would you expect the bottom of the well in Alexandria, 800 km north of Syene, to be lit up at the same time? 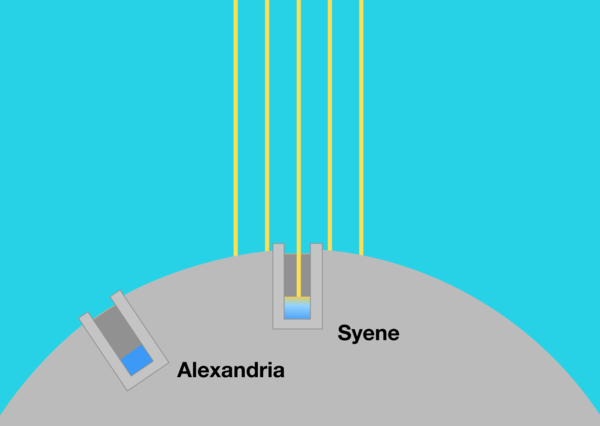 At the same time that the sunlight appeared to be coming from directly overhead in Syene, it had a more shallow angle of incidence in Alexandria, so the bottom of the well didn’t light up. 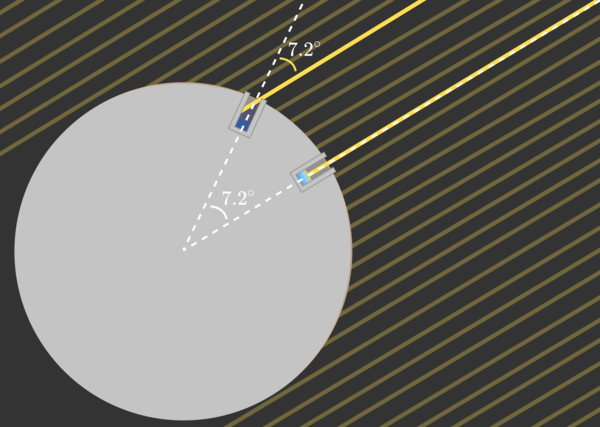 Eratosthenes noticed that the light coming into the well in Alexandria had an angle of incidence of 7.2∘. He concluded that, if the Earth were round, this indicates that about 7.2∘ of latitude separate Syene and Alexandria. This angle is about 1/50th the arc of an entire circle, so he concluded that 800 km must be 1/50th the way around the Earth.

On first glance, this doesn’t seem to support any flat Earth theory: if the Earth were flat, with the Sun illuminating from a hundred million miles away, you would be able to see the bottom of both the well in Alexandria and Syene at the same time because the light would come straight into both wells. 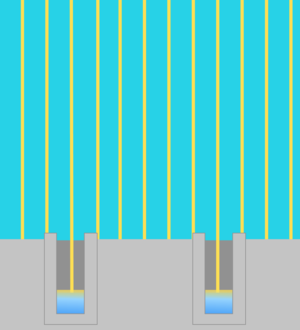 What modification to the Flat Earth theory might explain this observation?

If you imagine the Sun as a much smaller source of light floating only a few thousand kilometers above a flat Earth’s surface and moving throughout the sky, its illumination would appear to come in at an angle just like Eratosthenes observed in Alexandria. 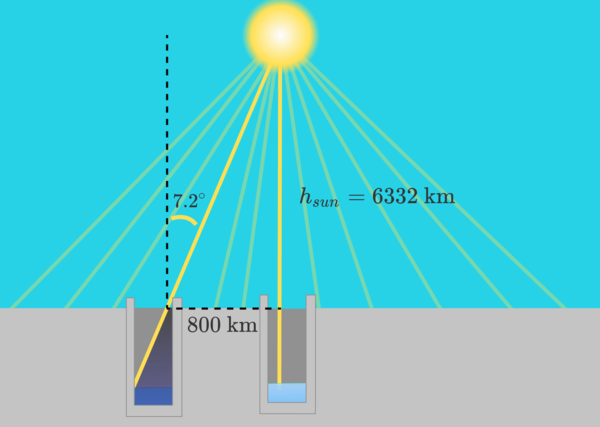 Without today's accepted view of the Earth's position in the solar system with seven other planets, it might seem obvious that the Sun is situated above the Earth and floats around the sky. This flat Earth model requires the Sun to float just 6322 km above the Earth, closer than most telecommunication satellites.

The ancients thought that the Sun was a fiery chariot ridden around the sky by a god. Today we know that the thermonuclear fusion going on in the Sun is not something we'd want in low orbit of the Earth. 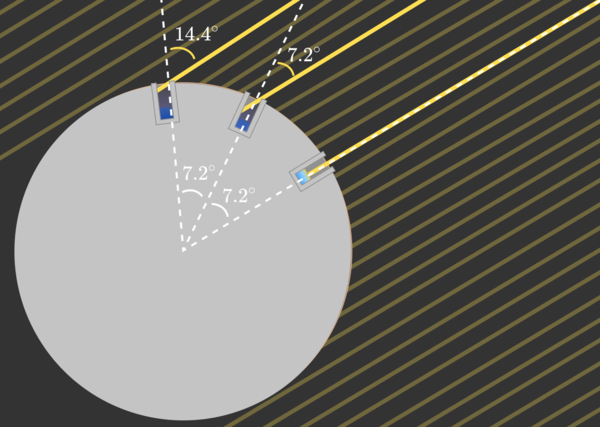 It is only by adding a third city with a well that Eratosthenes would be able to completely rule out the flat Earth. If we observed a well in Athens which lies another 800 km North from Alexandria, we would expect the angle of incidence on a spherical Earth to double to 14.4∘.

Would the angle of incidence on a Flat Earth be greater, less than or the same as the one predicted by a spherical Earth?

One of the simplest observations of a spherical Earth is also the most robust.

Since far before Columbus’s time, sailors and their families have become familiar with the sight of sailing ships disappearing behind the horizon. As the ships get further away from the harbor, the bottom of the ship disappears progressively, until only the top of the mast is still visible.

If departing ships appear to lower as they get more and more distant, the Earth’s surface must be curved. A flat Earth would not explain this observation, unless every harbor on Earth was equipped with entrance and exit ramps. 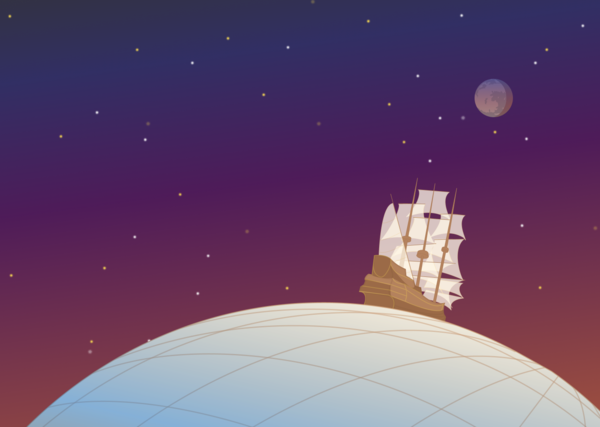 We can estimate the distance at which departing ships would disappear using the knowledge of the curvature of the Earth collected by Eratosthenes.

He used the two wells to determine that 7.2∘ of the Earth’s 360∘ corresponded to about 800 km of distance. From this observation, Eratosthenes estimated the total circumference of the Earth to be about 40000 km, which is within 6% of the value calculated with modern instruments.

About how far away would a ship with a 10 m high mast disappear from view on Eratosthenes’s spherical Earth? Assume the observer's height is 2 m. 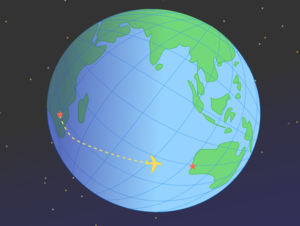 We live in a world with flights from Johannesburg, South Africa to Perth, Australia and with live video feed from satellites and even interplanetary sportscars. The debate over the shape of the Earth is long over, but the trolling of Flat Earthers can still teach us a valuable lesson about making a robust scientific argument.

An important part of being a scientist is not only knowing how the world works, but being able to prove it at a party.