We’ve seen that Riemann sums are connected to various natural questions: distance traveled, average value, and continuous probability can all be represented by the limit of a Riemann sum. This probably means they're important — so let's give them a name!

We define the integral as follows:

The notation is supposed to suggest the limit of the Riemann sums: the summation symbol ∑ becomes ∫ (which is a curved "S" for "Sum"), and the interval size (nb−a​) becomes dx, which represents the length of an infinitely small interval. Also, note that x here is just a dummy variable; we could just as easily write this as ∫ab​f(t)dt. 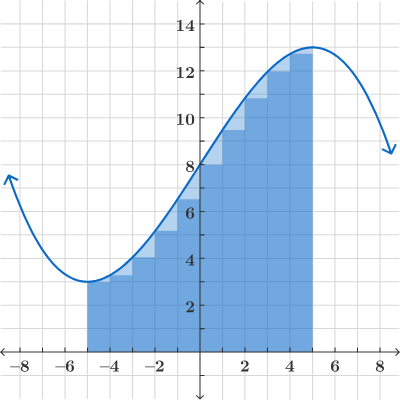 In any application, though, the key idea behind integration is the process we've already described: you chop up the interval [a,b] into many small pieces, multiply the function times the length of the piece, add the products, and take the limit as n gets large.

Suppose a<b<c are all numbers, and f is continuous on the interval (a,c). Is the following always true? ∫ab​f(x)dx+∫bc​f(x)dx=∫ac​f(x)dx

We’ve now seen how to evaluate some simple integrals; now we’ll move on to more difficult functions. In this quiz, we’ll begin by getting “reasonable” estimates, and in the following quizzes we’ll see how to calculate integrals exactly.

Remember that the integral just means “chop the graph into many rectangular pieces and sum their areas.” For example, the figure below shows how to get lower (blue) and upper (green + blue) bounds for the area under the curve f(x)=x2 using 3 rectangles (the third has height 0 and so is not shown). 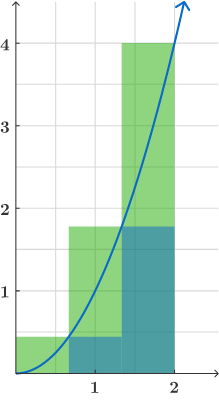