In everyday life, the objects we encounter and interact with tend to follow certain rules. As a result, our brains are wired with an internal logic for how we expect objects in the world around us to act: a tennis ball thrown against a wall will tend to rebound in a predictable fashion, a laundry hamper full of socks, when paired and sorted by color, will remain paired and sorted forever.

But we’ve all heard of quantum weirdness: the unpredictable laws of quantum behavior that caused Einstein himself to famously reject the conclusions of his own theory. Over the astoundingly productive first 27 years of the twentieth century, a group of physicists outlined laws describing microscopic phenomena by performing experiments with atomic and subatomic particles. Quantum objects don't just rebound off walls, and no matter how carefully you sort them, they always seem to get mixed up.

When it comes to quantum objects, it rapidly became clear that when things get small, things get weird.

“There is nothing new to be discovered in physics now. All that remains is more and more precise measurement.” 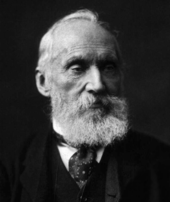 This quote is often misattributed to various preeminent physicists including William Thomson, the 1st Baron of Kelvin in the closing years of the 19th century. It’s usually interpreted with a knowing chuckle: little did these clever physicists know that the world of classical mechanics was about to be turned on its head and shoved out the door by the coming revolutions of relativity and quantum mechanics.

In fact, the true quote is a bit different, and reads:

“The future truths of physical science are to be looked for in the sixth place of decimals.”

The preeminent physicists in the closing years of the 19th century knew exactly where the secrets of physics were hiding: in increasingly accurate measurements of microscopic systems. Only when studying the very small with high precision would the shortcomings of classical mechanics become obvious.

The most common way to begin study in quantum mechanics, the physical laws which describe microscopic phenomena, is to follow its real-world historical development.

The story often starts as early as the double slit experiment showing the diffraction of light in 1801, or the spectral lines of hydrogen atoms first observed in 1859 that puzzled the physicists of the day. Each of these experiments connects to microscopic phenomena that would later be explained with quantum mechanics.

Every quantum mechanics textbook is sure to describe step by step how Max Planck and his radiation law upended the classical view of light in 1900, and how Niels Bohr developed a radical, new model of the atom in 1913. All of these breakthroughs came from precise measurement of microscopic quantum objects like photons and electrons.

The number of experiments that contradicted classical law began to pile up in the first decades of the twentieth century, and by studying them chronologically learners can come to empathize with how the physicists felt at the time: forced to abandon firmly held tenets of classical physics, and compelled to build up the laws of quantum mechanics as we know them today.

But we’re not going to follow this approach here. We’re not physicists with one foot still in the nineteenth century, so we can start with a clear and open mind.

This course will fast-forward through the quantum revolution and instead begin with an experiment from 1922 that exemplifies the behavior of quantum objects better than any other.

We will start by experimenting with a purely quantum property: spin.

The spinning subatomic particles we’ll be investigating are the least classical and most “quantum” objects that we could think of. With only simple two-state spin systems, the entire physical and mathematical framework of quantum mechanics will fall out as logical conclusions of the experiments, which is exactly what we'll do in Chapters 1 and 2.

But two-state spinning quantum objects are far from just a useful rhetorical tool. Gaining a firm understanding of spin systems and the curious case of quantum measurement is immensely rewarding to anyone interested in the cutting edge of quantum information, photonics, and statistical physics. Quantum computers are little more than carefully assembled arrays of two-state quantum objects, which you’ll be able to fully understand and appreciate in Chapter 2 of this course. 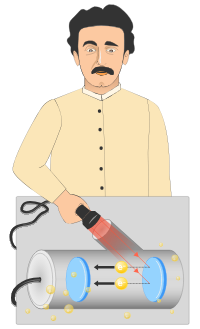 In Chapter 3, equipped with a well-developed intuition and all the mathematical tools required to explain the behavior and measurement of quantum objects, we’ll circle back to the rest of the quantum world to describe all of light and matter with quantum mechanics.

The quantum theory of light introduces the concept of a photon and leads to the radical idea that all of matter has a wave-nature associated with its motion. Along the way, an equation of motion that describes the time-evolution of quantum objects emerges: the Schrodinger equation. Together with spin, these ideas can explain many of the wonders of the modern world: stimulated emission with lasers, semiconductor transistors, and magnetic resonance imaging will be explored in the later chapters.

Of course, quantum mechanics isn’t limited to such complex modern phenomena: all of classical physics including Newton’s laws are buried somewhere in the Schrodinger equation too, as we’ll soon see.

We certainly have our work cut out for us. Understanding quantum objects is challenging, but gaining an intuition of quantum behavior is incredibly fun and rewarding. The rest of this chapter will walk through a series of experiments into particle spin, and ease in to the fundamental and strange aspects of quantum measurement.

Our exploration will begin largely conceptually in an effort to build intuition, which we can then match with mathematics in the next chapter.