Bobo the Clown wants to cross a bridge over dangerous waters while performing a three ring juggle, in which one or two rings are in the air at all times. The bridge can support a maximum weight of 1000 N, above which it will collapse. Each ring weighs 100 N and Bobo himself weighs 800 N. 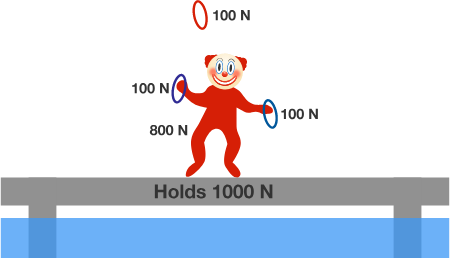 Coco the Clown tells Bobo that it will be safe to cross the bridge as long as Bobo is never holding all three rings at once. Dodo the Clown disagrees, arguing that the juggle will collapse the bridge, even if at least one ring is in the air at all times.

Who is correct, Coco or Dodo?