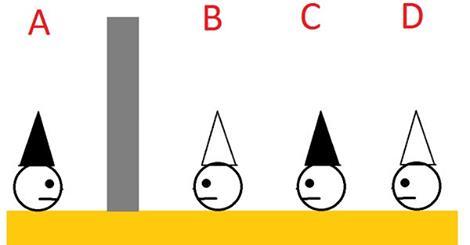 Shown above are four men buried up to their necks in the ground. They cannot move, so they can only look forward. Between A and B is a brick wall which cannot be seen through. They all know that between them they are wearing four hats--two black and two white--but they do not know what color they are wearing. Each of them know where the other three men are buried.

In order to avoid being shot, one of them must call out to the executioner the color of their hat. If they get it wrong, everyone will be shot. They are not allowed to talk to each other and have 10 minutes to fathom it out.

After one minute, one of them calls out.

Question: Which one of them calls out?

Note: This is not a trick question. There are no outside influences nor other ways of communicating. They cannot move and are buried in a straight line; A & B can only see their respective sides of the wall, C can see B, and D can see B & C.