A cruel and fickle king 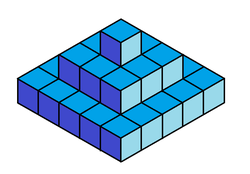 For the past decade, the king of Mathlandia has forced his subjects to build a pyramid in his honor. The king decreed the pyramid to be constructed with cubic stone slabs. The king also decreed the pyramid to be built in 100 square levels, with each subsequent level 2 units less on a side than the previous level. The top level was to be constructed with a single cube. (See the picture for an example of a pyramid 3 levels high constructed in the same way).

The king would tolerate no waste, so he ordered one of his subjects to be sacrificed for each leftover slab of stone.

How many of the king's subjects will be sacrificed?