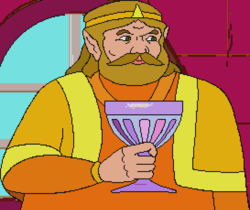 The cruel, devious King Calvin has captured sixty hapless Brilliant users! He puts all of them in a prison cell, ties each of them down to a chair, and seals their mouths up with duct tape so they can never communicate with each other.

Fortunately, their prison guard is the compliant, yet rigorously virtuous Andrew. He takes a bunch of sticky notes, writes a 0 or a 1 on each of them, and places them at random on the forehead of each of the prisoners. Each prisoner does not know the number on their own forehead, but they can see the numbers on the others’ foreheads. Through this, the guard offers a way out: if someone can guess the number on their forehead correctly, he will let the prisoner out during the night while King Calvin is sleeping. But there is one condition: each prisoner has only one chance to guess, and if they choose the wrong number, then they will remain in the prison, forever! (This means that prisoners will only guess if they know that they are absolutely correct.)

Guard Andrew scoffs at the prisoners’ begs for mercy, flippantly providing a seemingly trivial hint: at least one of the prisoners has a 0 on their forehead. However, Brilliant users tend to be rather...well, brilliant! After only six nights, King Calvin checks the prison himself and is furious to find that all of his prisoners have successfully escaped!

Find the largest possible number of prisoners with 0s on their foreheads.

All of these prisoners are level 5 in logic. (In other words, assume that they are perfectly rational and have infinite intelligence in this situation.)


Hint: There might be days when the prisoners are unable to make a definite guess without a night passing.

This problem was inspired by a quite tricky puzzle which my friend Josh Y. told me.