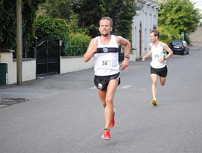 In the first race, John finished the race when David was at the 99-meter mark. However, David wanted another race. So John said, "This time, I will start 1 meter behind the starting line. That means I run 101 meters while you run 100 meters. And we both start together,". David agreed and there was another race.

If their speed in the second race were the same with that in the first race, who would reach the finish line first?