Alia and The World Of Numbers 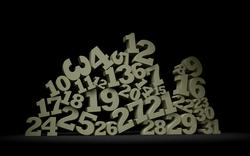 Alia is A high school Student , she loves math , while she was having a math lecture , she fantasized about The big world of numbers , remembered most of math Sequences that she had learned in her entire life , this took Alia more than 30 minutes . thus , Her teacher had noticed that she didn't Concentrate in his lecture , he was so angry , he became upset and decided to give Alia a problem , and if she solved it , he would made her stay in his lecture , Otherwise , She will be Out and won't attend any of her teacher's lectures for a Week , that is very dangerous because After 2 Weeks they have A final Exam , She is So Tensioned. Consequently, Alia asked you for help , she will give you the problem and take the answer from you , She have a sequence of numbers which starts from 1 and ends to n : If the Sequence like that : 1+2+.........+5+6......+n = 120n , Find n.