An electricity and magnetism problem by Sudeep Salgia 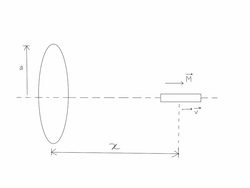 Along the axis of a fixed small loop of resistance R, a short bar magnet with dipole moment M is moved away from it with a velocity v. The M is oriented such that it points away from the ring as shown in the figure. Given that the radius of the loop is a and distance of the magnet from the center of the loop is x, then the magnitude of the force of interaction between the loop and the bar magnet can be writen as F=qp​.Rxkμ0r​Msatvj​ where j,k,p,q,r,s,t are natural numbers with p and q coprime.
Find the value of j+k+p+q+r+s+t−2.