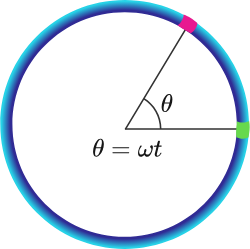 The ring has a total electrical resistance R, which is uniformly distributed over its circumference.

The red point traverses over the ring's circumference at a constant angular speed ω, and its location coincides with that of the green point at time t=0.

The time-averaged (over an integer number of rotational periods beginning at t=0) equivalent resistance between the two points can be expressed as αR​.

Determine the value of α.