Before Becoming A Card Shark, You Need To Know This Method - Part 2 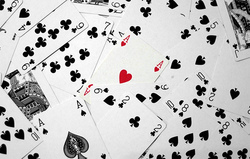 Alice, Bob, and Charlie are all sorting standard poker decks.

Bob first sorts the cards into piles by suit (4 piles) and only then sorts them into their final order.

Charlie decides to sort the cards into piles by number instead of by suit before the final sort (13 piles).

The actions they take in sorting the cards take the following amounts of time:

If they were given 1000 randomly shuffled decks to sort, in what order would we expect them to finish?