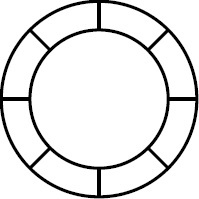 Armin planned to flip ten fair coins and for each head that appeared, he would move the red token one position clockwise. Before flipping the coins, Armin (correctly) calculated that the probability of the red token ending in the same position as a blue token was ba​ where a and b are integers such that a+b=1400. Armin was a bit lazy with his calculation so the fraction ba​ might not have been in lowest terms.

Determine the number of different sets of spots which may contain blue tokens.

Clarification: Since the red token is fixed, the sets of spots obtained by reflection or rotation are considered distinct.