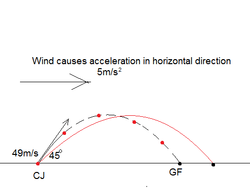 Cody is going out , and his GF is angry for this .... So Cody tries to convince her , but for that he doesn't have much time to go to her . So he throws a chocolate towards her ... (thinking that she might forgive him :P ) . He threw it with initial velocity u=49m/s and making an angle θ=45∘ with the horizontal and it was a perfect throw so it was going to reach the target (his GF) . But suddenly , an unexpected blow of wind came , caused an acceleration of a=5m/s2 in horizontal direction. So the chocolate went somewhat far away from his GF , so his GF had to run a distance to get the chocolate . How much distance in meters did she have to run to get the chocolate ?