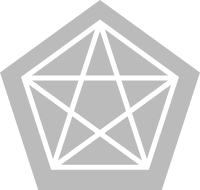 CJ and Dan are playing a game in which they take turns coloring the sides and diagonals of a regular pentagon, shown in white to the right. CJ uses a blue marker while Dan uses a red marker. A player can only color the entire segment between two vertices of the pentagon, and cannot color a segment that has already been colored. The first player to make a triangle entirely of their own color for which all three vertices are vertices of the pentagon wins the game.

If CJ goes first and both players play optimally, who will win the game?