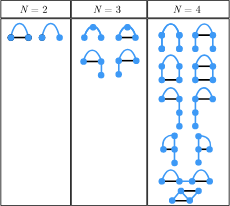 RNA molecules are long chains of different repeating units called bases, which can either fold and pair with any other base on the same molecule, or remain unpaired. For short RNA chains, the number of possible arrangements can be quickly enumerated by inspection. Which arrangement the RNA tends to fold into depends on its sequence of bases: given a sequence, every arrangement can be "scored", as some pairs are more likely to form stable bonds than others.

For biological RNAs, the typical length is greater than 100 bases. As with shorter lengths, the arrangement that the RNA folds into depends on its sequence, but the number of possible arrangements to consider is outrageously large, including many common structural motifs shown below.

For an RNA molecule consisting of N=100 bases, there are n different arrangements which it can choose from.

How many digits are in n expressed in base 10? 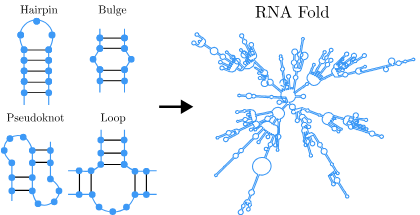