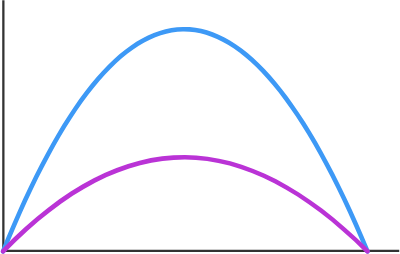 The army is testing out a new prototype artillery cannon with an uncommonly high muzzle velocity of 1000 m/s. The design bugs haven't been fully worked out yet, so the cannon has to wait at least a full minute between shots (reloading, etc.). The cannon can be aimed with an angle between 0 and 90 degrees with respect to the horizontal.

A particularly demanding exercise is being conducted, in which the cannon fires an initial shot into the air, and while the first shell is still in the air, a second shot is fired (at a different angle) so that both shells impact the target (at ground level) simultaneously.

What is the maximum horizontal distance from the cannon to the target, such that this is possible?