Double rainbow all the way across the sky! 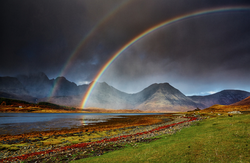 In a marathon, there are 14 runners. There are exactly of two runners that are wearing the same color shirt for each color of the rainbow.

If we know that the first runner wore a red shirt, what is the total number of possible configuration(s) of all the runners (from fastest to slowest)?

As an explicit example, if the runners were arranged as ROYGBIVROYGBIV, then there are 6 runners between all of the colored pairs.

This is a harder version of an earlier problem.