Escaping the Cape, Inertia of Serbia 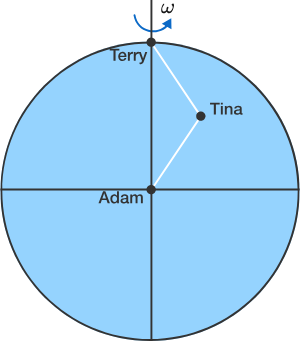 Two generals, Adam and Terry, aim their long range cannons at a third general Tina. Each general calibrates the explosive power of their cannon so it will hit Tina's base using the least energy possible. Tina's base is an equal distance (along the surface of the Earth Earth) from Adam and Terry.

If the positions of Adam and Terry are as shown above, which general will need to launch their cannon rounds at a smaller speed in order to hit Tina?