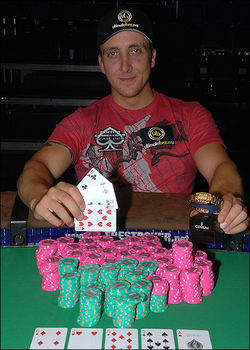 The Las Vegas casino Magnicifecto was having difficulties attracting its hotel guests down to the casino floor. The empty casino prompted management to take drastic measures, and they decided to forgo the house cut. They decided to offer an “even value” game--whatever bet size the player places (say $A), there is a 50% chance that he will get +$A, and a 50% chance that he will get −$A. They felt that since the expected value of every game is 0, they should not be making or losing money in the long run.

Scrooge, who was on vacation, decided to exploit this even value game. He has an infinite bankroll (money) and decides to play the first round (entire series) in the following manner:

Now, what is the expected value of Scrooge’s (total) winnings from this first round (which ends when he leaves)?

This problem is part of Go Big Or Go Home, which explores the linearity of expected value.