One day Ram and Shyam were playing a game in which they connect the dots(4 by 4, as shown below) with a line such that a square can be formed out of them, the one who completes a square (i.e. who draws the fourth side of the square, owns that square).

I have shown an incomplete part of the game in which black lines are drawn by Ram and the red line are drawn by Shyam. Its Ram's turn right now. 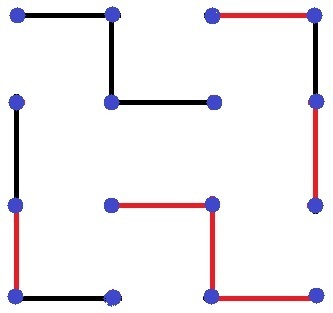 What is the maximum number of squares that Ram can form?

Ram begins the game. Each one of them draws the line alternately. When a player forms a square, he gets an additional chance to make a new line.Both of them play optimally.