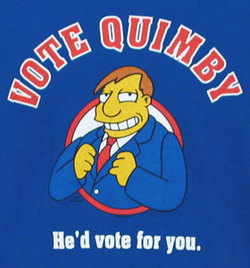 In a recent election, Sideshow Bob and Joe Quimby decided to run for election for Mayor of Springfield. The decision depends on the results in two districts: City and Countryside. Whichever candidate wins both districts wins the election.

The results shows that

Because there's a higher percentage of people who have voted for Joe Quimby in both the City and Countryside, Joe Quimby was re-elected as the Mayor of Springfield.

If the decision does not depend ​on winning individual districts​, but instead on the ​winning more votes in the entire population, then show that Sideshow Bob would have won the election. Also, if Sideshow Bob beat Joe Quimby by x% of the total voters, what is the value of x?