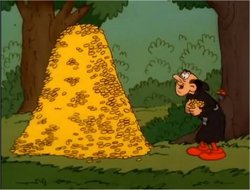 The wife looked puzzled. Can you help Midas' wife by finding out how many gold coins they have?