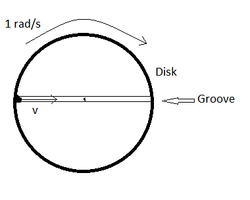 We have a disk of mass M and radius R placed on a horizontal plane. A cylindrical groove of radius r is made on a diameter.Now a sphere of mass m and radius r is placed in the groove at the circumference of the disk.

At t=0 the whole system is rotated with an angular velocity 1rad/s as shown in the figure.Also at the same time the sphere was projected with a velocity v towards the centre of the disk.Find the minimum velocity v of the sphere such that it is able to reach the other end of the groove.