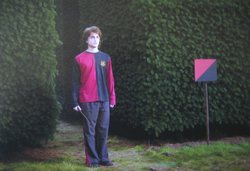 Harry Potter is in the maze to seek the Goblet of Fire. There are four paths that can be taken with Equal probability.

Path A leads to the Goblet in 5 minutes.

Path B leads back to start and takes 8 minutes.

Path D is 2 minutes long and leads back to start.

Note --- The Magical Maze has NOT affected Harry`s Memory because of a protective spell, so he remembers exactly which paths he had taken previously.

What is the Expected Escape Time (in SECONDS) in which Harry Potter can exit the maze and reach the Goblet?