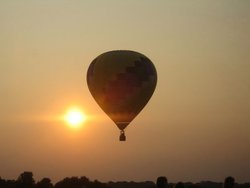 Krishna and Sharky are out on a Hot-Air Balloon ride, and to their horrors, the balloon, instead of moving up with a speed of 27.949783 kmph, was moving down with the same. To make it move up with that speed, they need to reduce the weight.

The Hot Air Balloon has hot air filled in it, which gives it a constant upward force of 1000 Newtons and an air resistance, always working against the direction of velocity and directly proportional to the speed, acts on the Balloon. They want to reduce the weight, and Krishna suggests throwing their clothes off, which Sharky aggressively rejects with a bright idea.

'Let's Vomit!' yells Sharky to Krishna, 'It's the easiest and the safest way to reduce mass on the Balloon.' Krishna reluctantly agrees.

It so happens that Krishna drank a lot of water before coming, and so his vomit is dilute with a density of 7.7 g/cc. And Sharky ate a wild bird in the morning, so the density of his vomit is 10 g/cc.

Krishna and Sharky weigh 62.7 and 52 Kilograms respectively. They need to vomit so that their Balloon starts going up with the same velocity.

How many millilitres does Krishna vomit, given that Sharky vomits 2.5 Litres.

The value of g should be taken as 10m/s2 and the Balloon has negligible mass. Any other assumptions which seem understood can be taken.

All the facts which appeared in this problem are correct. It was a tough task to find the densities of vomits of Krishna and Sharky.