How Many Can You Save ? 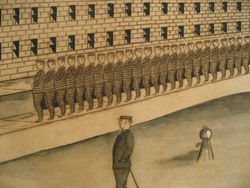 One hundred prisoners are lined up, one behind the other, all facing forward. On each prisoner's head is a hat, either red or black. Each prisoner can see the hats of all the people in front of him, but he cannot see his own hat and he cannot see the hats of the people behind him. Starting with the prisoner in the back of the line (the one that can see all 99 other prisoners), the prison warden asks the prisoner what color hat he is wearing. Each prisoner can hear the guesses of all of the prisoners behind him. If a prisoner correctly guesses his hat color, he is set free. If he guesses wrong, he is executed.