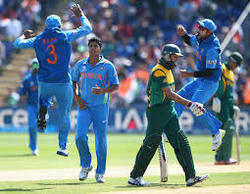 India after finishing their batting , had set up a target of 307 runs in 50 overs against South Africa in cricket World Cup 2015.In achieving this,2 players of India played fabulous.One was Shikhar Dhawan who scored 137 runs , and the other was Ajinkya Rahane who scored 79 runs.However , South Africa did not manage to score 307 runs but lost all her wickets after scoring 177 runs , at this time South Africa still had 10 overs in hand.If the sum of scores of Shikhar and Ajinkya is only considered as the score of India(Scores of other players not taken into account) , assuming that South Africa still had some wickets and 10 overs in hand ,

Find the required run-rate for South Africa to win this match(not to draw).