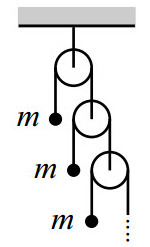 Consider a system of infinite pulleys as shown in the figure. Find the acceleration (in m/s2) of the top mass.

Details and Assumptions:
∙ Initially the masses are held stationary, and then released simultaneously.
∙ The masses of the pulleys and the strings are negligible.
∙ g=9.8m/s2