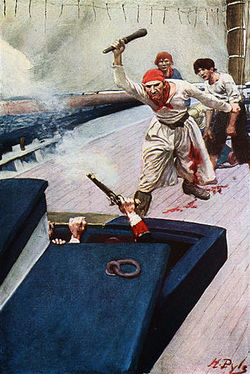 Five pirates of different ages found a treasure chest with 100 gold coins. In the middle of the ocean, with no land in sight, they decide to split the coins using this scheme:

The oldest pirate proposes how to share the coins, and ALL pirates (including the oldest) vote for or against it. If 50% or more of the pirates vote for it, then the coins will be shared that way. Otherwise, the pirate proposing the scheme will be thrown overboard, and the process is repeated with the pirates that remain.
The pirates are a bloodthirsty bunch with no loyalty. If a pirate would get the same number of coins if he voted for or against a proposal, he will vote against to watch the proposer be thrown overboard.

Assuming that the pirates are intelligent, rational, greedy, and do not wish to be thrown overboard, (and are rather good at math for pirates) what should the oldest pirate propose?