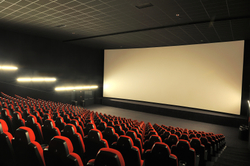 You! You're the one who helped me build my previous theater addition, right? I hope you still have all that analysis mumbo jumbo you worked on because I'm building another theater and I need your help to size it again.

Little has changed since the last time, but I'll give recap of the facts you need to know anyway. Just a few things the PR people are making me brush up on... ugh. Can't stand those "fair-trade this", "fair-wages that" - you can give me numbers... I love numbers!