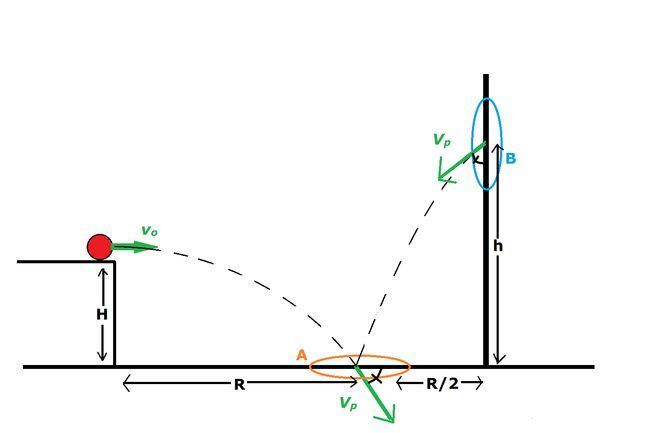 If you have never played the video game Portal, a portal is essentially a wormhole (or tunnel) which can teleport an object from one location to another instantaneously, almost as if the object had simply passed through a door. The portal will conserve kinetic energy and speed. However, the object's direction of travel will get shifted depending on how the portals are oriented relative to each other. In math-speak, the object's velocity vector relative to the first portal is equal to that same object's velocity vector relative to the second portal.

Now for the problem:

A ball is launched horizontally off of a ledge of height H at an initial speed of Vo​. Portal A (orange) is placed on the ground at a distance R such that the ball will pass directly through the portal's center.

On a wall a distance 2R​ away, Portal B (blue) is placed at a height h such that, after the ball passes through, it will again fall into Portal A, but from the other side.

Give your answer in meters, rounded to 3 significant figures.